Launched at Sight Unseen Offsite during New York design week with the aim of finding a manufacturing partner, Visibility's first collection features a coat stand, mirror and a collection of kitchen items made of porcelain.

"Our collection centred around a series of products exploring the intersection of beauty and usefulness in the home," said Visibility co-founder Sina Sohrab. 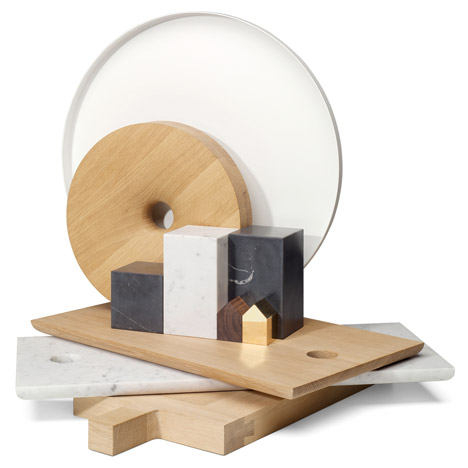 "As our first collection we wanted to show a broad perspective on utilitarian home objects and the balance between functional value and aesthetic value," added Sohrab.

The Plus Coat Stand uses cross and circle shapes which can seen seen when viewed from above, and looks like a tall spade in a bucket from the side.

It is made from welded stainless steel with a wood joint and moulded rubber tips, the rubber ensuring garments stay in place using friction rather than with a traditional hook design.

The Arc Mirror uses a single piece of waterjet-cut, bent steel for both its reflective and structural properties. The mirror reflects both the user and the objects of daily ritual stored in its shelf, while a hole on one side can be used for a hanger or towel.

"The Arc Mirror is inspired by the idea of material efficiency. One piece of metal is creating the reflective surface and the shelving in one motion," said the designers.

Ridge Kitchen is a collection of kitchen tools made of slip cast porcelain, ridged to aid grip.

"The surface conveys use through pattern and motion. This pattern acts as a visual and physical grip, inspired by grips commonly found on machinery and tools," Sohrab told Dezeen.

Bringing this language into the porcelain items gives the user a better hold while using them but also a visual understanding of how they should be used. These objects want to be as charming as they are useful."

The collection includes a pitcher, a pestle and mortar and a grater designed for garlic and ginger, based on traditional Japanese porcelain graters.

"It is important for us to design products that use archetypes in a clear and honest way," said Sohrab. "The idea being that this clarity allows the user to distill the products' meaning and value."

Visibility is a research-driven design studio specialising in product, spatial, and service design. It was founded in 2012 by Joseph Guerra and Sina Sohrab and is based in New York City.