German design studio Kaschkasch has used the shape of an Italian cartoon character as the basis for this lamp for Danish brand Normann Copenhagen.

Cap is a desk lamp with a large semi-spherical shade, which counterbalances the geometric design of the base. It is made from steel lacquered in a matt finish.

The idea for the shape came from a cartoon character called Calimero – a little chicken with an egg shell on his head – created to advertise an Italian soap brand and later licensed for a series in Japan.

"The shade can be rotated, making it possible to direct the light. It can function as a reading lamp or to create mood lighting," said Normann Copenhagen CEO and co-founder Poul Madsen. 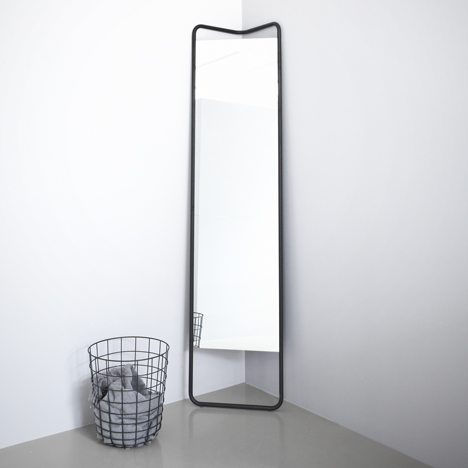 Mirror by Kaschkasch Cologne for Menu designed to fit into corners

Designers Florian Kallus and Sebastian Schneider of Kaschkasch added: "It's important that products have an element of personality and character, because then they evoke emotions. A mass produced product is not really emotional, so it's important to give them character. That's why people identify with the product."

The base of the lamp is die-cast – formed by pouring molten metal into a reusable mould – and the shade is deep drawn: a process that involves forcing cold metal through a die to shape it. The shade is attached to the bulb with a spring steel clip.

The Cap Lamp comes in light blue, pink, white and deep blue, the latter intended as an alternative to the traditional black.

"We worked on the colour palette closely with the colour experts from Normann Copenhagen, doing a lot of research and testing until we finally found the perfect colours for the Cap Lamp, that also fitted within the wider Normann Copenhagen collection," said the designers.

The latest products by Normann Copenhagen include a family of candle holders and sofas designed to resemble risen bread – see an interactive slideshow of the brand's latest collection.