This kettle by Kingston University graduate Anna Czaniecka is shaped like two mugs so the user can precisely measure how much water to boil for cups of tea.

Anna Czaniecka's Kttl is designed to save energy, and therefore money, that is wasted from boiling too much water in traditional kettles.

"I started this project by looking at kitchen appliances and I came across some data about the unusually high energy usage of a standard electric kettle," she told Dezeen, stating that three quarters of British households overfill their kettles – wasting a total of £68 million per year. 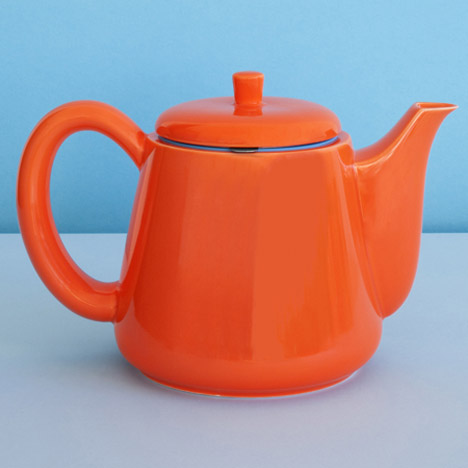 "I realised that it might be the shape of a standard kettle that causes a problem as it is so different from a cup shape it might be quite difficult to imagine the volume of how much water do we need," she said.

To test her theory, she asked people to fill different-shaped vessels with the equivalent of one cup of water (around 284 millilitres) and found that the best accuracy was achieved using a standard mug shape.

Czaniecka created the kettle to hold 568 millimetres– the volume of two standard mugs. The mug-shaped sections stack on top of each other, creating with a line between the two for measuring.

"Its construction forces the user to look inside while filling it with water to have a better control over the amount of water needed," she said. "It is a perfect product for small households."

Czaniecka 3D-printed a full scale model of the kettle, which was on display at the Kingston University graduate show earlier this month. If the product was to be mass produced, it would be injection moulded from heat-resistant plastic.

"At the moment it is a speculative project which highlights the amount of water and electricity being wasted in the scale of the country and offers a simple, pragmatic solution," Czaniecka explained. "However I would love it to become a real product that could be mass produced."