Zigzagging balconies with larch railings enliven the facade of this apartment block in Graz, Austria, by Love Architecture and Urbanism (+ slideshow).

Graz-based office Love Architecture and Urbanism designed the balconies as a simple way to transform the new Ragnitzstrasse 36 apartment block into something more striking.

"Building cost and flat size were the big issues in this project. Beside that we had a free hand to design something unique," architect Bernhard Schönherr told Dezeen.

"This building's overall architectural character is defined by relatively inexpensive building components, such as the balconies." 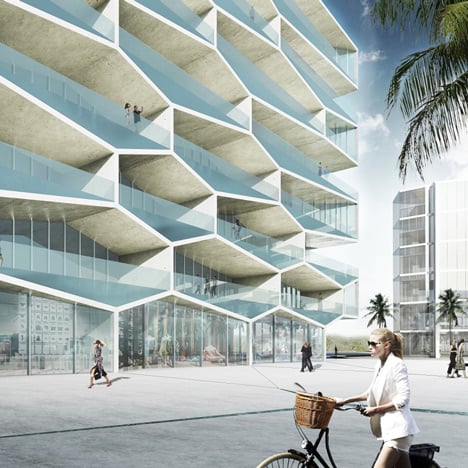 The four-storey building has 15 small apartments and one penthouse apartment, and is partly designed to meet housing demand from doctors, nurses and other medical staff working at a nearby hospital – the largest in Graz.

The apartments range from 40 to 50 square metres, and the balconies give them another 17 square metres of space.

"Apart from looking great and sculptural, the balconies were designed as a direct extension of the flats, to make the small spaces look bigger from the inside," said Schönherr.

The triangular shape of each balcony's roof and floor creates a partially covered outdoor space, with a wide edge that can accommodate a table and chairs, and a thinner edge for plants and other small objects.

Both the triangular shape and the fabric-covered openings in the partitions between them also allowed the architects to get around limitations set by authorities about how much floor space could be built on the site.

"There is a maximum amount of gross floor area you are allowed to build," explained Schönherr.

"The balconies are only included fully within this calculation if they are completely covered with a roof and two walls. By making balconies that are not fully enclosed by a wall and roof, we were able to limit how much they contribute to the calculation, without actually needing to limit their size."

Love Architecture and Urbanism chose larch for the railings to soften the appearance of the south-facing facade.

"Larch is regional, affordable and durable, and it has a nice feel and colour. We also think it will look beautiful when it ages to a greyer colour," said Schönherr.

By contrast, the street-facing side of the building is covered in perforated metal, which acts as a privacy screen for external access balconies to the flats.

"It also creates a sensitive, multi-layered sequence as you come from public to private space," said Schönherr. "It makes the distance between the street and the apartments feel bigger, and also provides shelter from rain and snow, without being completely closed."

The bottom three storeys of the building house five apartments each, and a basement level accommodates parking space. The top floor has a larger penthouse apartment which is set back at the edges to create a large terrace on both sides.

Photography is by Jasmin Schuller.

Here's some more information from the architects:

The construction of small apartments that are relatively inexpensive yet still high quality is currently one of the most essential challenges in housing construction. The Ragnitzstrasse 36 project is meeting these conflicting priorities in the following manner: a structurally simple, systematic and efficiently designed base building structure houses all apartments. To the south, this structure is flanked by zigzag-shaped balconies, while the north side features a pergola opening encased in expanded metal. This building's overall architectural character is defined by relatively inexpensive building components, such as the balconies.

The building houses 15 small apartments (40-50 square metres) and one penthouse on the top floor, with a subterranean parking level below. All apartments are oriented to the south and feature outside areas that face the green space of Ragnitzbach. The balconies and outside areas that cover the entire apartment widths are partially roofed and feature a minimum size of 17 square metres. Thus, the actual living area extends towards the outside area, and living rooms and bedrooms appear larger and more spacious.

The larch-wood balcony railings are placed in a fan-like manner along the zigzag rhythm of the cantilever slab, with both materials and workmanship creating a homely atmosphere.

The north-facing pergola blocks the traffic noise of Ragnitzstrasse. The expanded metal facade is mounted such that it appears almost transparent from the west. However, when approaching the building from the east, the facade appears closed and volumetric, which creates a kind of visual tilting effect as one passes the building.

Overall, the appearance of the structure varies dramatically depending on the viewer's perspective, which gives the building a very sculptural and three-dimensional feel.