Vivienne Westwood has redesigned the full range of uniforms for the 7500 members of staff working on Richard Branson's airline.

"She was the natural choice to redesign the uniform across all areas of our business," said a statement from the airline. "Firstly because original design and sustainability are vital to both Virgin Atlantic and Vivienne Westwood."

The final outfits were shown at an event in London last night, after being trialled by members of the Virgin Atlantic team since the designs were first released last May. 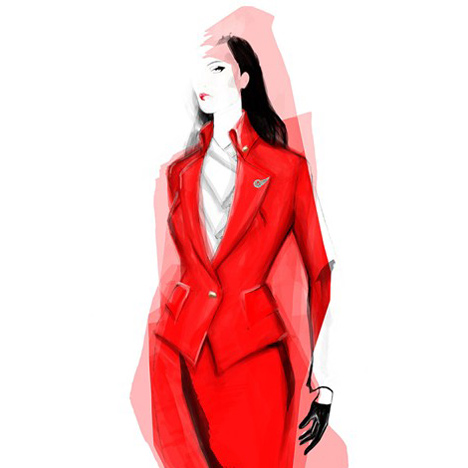 The uniform for female cabin crew features a bright red jacket with nipped in waist and high collar detail, paired with a pencil skirt with a hemline that slopes towards a back pleat.

A matching red double-breasted coat has an oversized collar and gathers at the waist.

The outfit is accessorised with a red shoe incorporating the Westwood's signature hourglass heel and a red leather bag that features diamond-shaped handles.

Dark charcoal tailored suiting including a single-breasted jacket has been designed for the flight crew, with a cravat for women and a tie for men.

A hand-drawn wings detail recurs throughout the collection, which also extends to attire for the airline's Clubhouse hospitality staff.

Virgin Atlantic's upper class bar and cabin was designed by VW+BS, while Pengelly Design created an airline seat that converts into a 2.2-metre-long bed for the company.