News: Frank Gehry has unveiled yet another reworked design for the proposed skyscraper complex in his home city of Toronto, reducing the number of towers from three to two.

Gehry, 84, came under fire from planning authorities last year after revealing his last proposal for the gallery and university complex, which involved demolishing the existing Princess of Wales Theatre at King Street West and building a trio of 82-86-storey skyscrapers.

The California-based architect, who grew up in the Canadian city, has now responded by scaling back the proposal, allowing the theatre to remain in place. The towers are taller, with one extended up to 92 storeys, but there will now only be two instead of three. 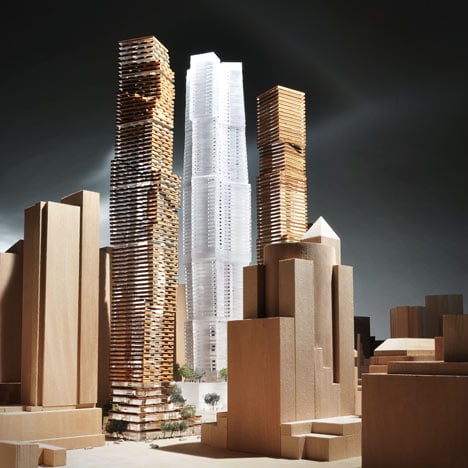 "Three towers gave the scheme a sculptural quality," Gehry told the Toronto Star. "With two, it ain't there. But now I think it's more Toronto."

The revised complex, commissioned by art collector David Mirvish, also retains two of the four existing warehouses on the site located in the centre of Toronto's entertainment district.

The new towers will be positioned over a pair of six-storey podiums and are designed to recreate the gently undulating forms of the architect's Dancing House in Prague.

"One sentinel is on the south, one is on the north. In one fell swoop, I found our sense of dignity," Gehry told the Star.

"Fred and Ginger grew up and moved to Toronto," he joked. "In a way, two towers feel better. It's not so crowded."

The King Street West complex will also include a large art gallery and a learning centre for OCAD University's art history and curatorial courses. These will be accompanied by shops, restaurants, offices and apartments.

Gehry presented his first proposal for the site in 2012. Despite objections from the city's planning department, the proposed heights remained unchanged when he revised the scheme a year later.