Dutch studio Scholten & Baijings has created a collection of interior fabrics for New York textiles brand Maharam with a pattern large enough to upholster an entire sofa without repetition.

Blocks and Grid are the first two designs in a series of upholstery textiles that Scholten & Baijings are developing in collaboration with Maharam Design Studio.

Stefan Scholten and Carole Baijings, approached the project by embarking on an investigation into modern colour blocking. 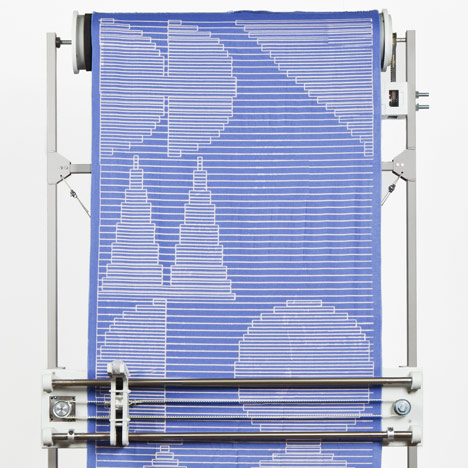 That led them to develop two large-scale compositions based on the amount of fabric typically required to upholster an entire sofa. The resulting textiles both have massive nine-metre repeats – the length of fabric before the pattern begins again – and a more standard width of 142 centimetres.

Blocks and Grid had to succeed both as freestanding designs and in application. "A nine-metre piece of fabric that shows the whole repeat has to be just as interesting as a single metre of fabric," explained Scholten.

"In a Mondrian painting, the composition fits perfectly within the parameters of the canvas," said Baijings. "Making a composition for an upholstery fabric calls for an entirely different approach."

Typically of the studio method they are known for working in, the pair resolved this challenge using a multitude of scale models.

Both textiles explore how colour perception translates into woven wool – the finished fabrics are 92 percent wool and 8 per cent nylon – and are designed to combine with each other.

"The density of the grid determines how one experiences colour and gives the colour a more airy appearance than a monochromatic colour plane," said Scholten.

Blocks and Grid initially debuted as part of The Dinner Party, an installation at London's V&A museum during the 2013 London Design Festival, and in the Art Institute of Chicago’s exhibition, 3 in 1: Contemporary Explorations in Architecture and Design.

The designs will feature in another installation of Scholten & Baijings' work this summer at the Villa Noailles in Hyères, France, and both textiles have been acquired for the permanent collection of the Cooper-Hewitt National Design Museum.

A third textile, Tones, will be presented at NeoCon 2014 and introduced by Maharam in Spring 2015.