A combination of curved and diagonal beams gives an asymmetric profile to this home in Yamagata Prefecture, Japan, by Tokyo studio International Royal Architecture (+ slideshow).

International Royal Architecture (IRA) designed KHT House to accommodate both the younger and older generation of a family, dividing the plan into two halves to suit the different lifestyles of its occupants. 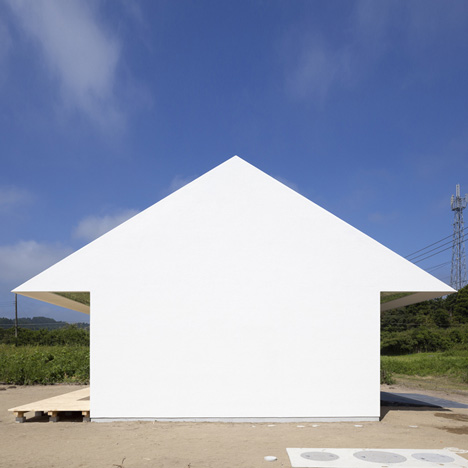 The west side of the building features a gently mono-pitched roof, beneath which the studio has designed a two-storey home for the younger members of the family that centres around a double-height living room.

In contrast, the east side of the structure is sheltered beneath a roof that curves upwards, creating a single-storey residence for the family's elders with some loft space overhead.

"The roofs of the houses on both sides are smoothly connected, although their heights are not equal," explained the architects.

A rectangular void cuts through the centre of the house to create communal spaces, which include a pair of traditional Japanese-style rooms that can be opened out onto one another.

"While the Japanese-style room is separated into two for each of the families by default, it can also be connected for annual ceremonies," said the IRA team, who also recently completed a split-level house in Tokyo.

A large terrace stretches out on top, sheltered underneath the roof. Currently this is only accessible through the younger family's home.

The exterior of the house is clad with black sheets of Galvalume cladding – a kind of aluminium and zinc alloy. This creates a noticeable contrast with the recessed entrances, which have been finished in a brilliant-white render.

Canopies sheltering south-facing windows appear to have been peeled back from this facade, while the roof surfaces are finished in the same material, designed to protect the interior from regular snowfall.

"We connected the roof and walls seamlessly with Galvalume steel sheets, and the walls, which expose birch plywood in each room, support the heavy weight of snow," added the designers.

The entrances to both sides of the house are located to the east. Both features its own sheltered outdoor area, where residents can take off muddy shoes or stow away bicycles.

Dining and kitchen areas occupy similar spaces on both sides of the building. There are four bedrooms in total – with one ground-floor room in the elders' home and three first-floor rooms for the younger residents.

Small and square are you used across the building, with as many as eight puncturing one facade.