Berlin architecture firm Knowspace has created a pair of red brick residences and studios with ridged roofs for two artists in a creative community on the outskirts of Beijing (+ slideshow).

The live and work spaces were designed by Knowspace for two painters who wanted to move out of Beijing to an artists' community called Songzhuang in the city's eastern suburbs. 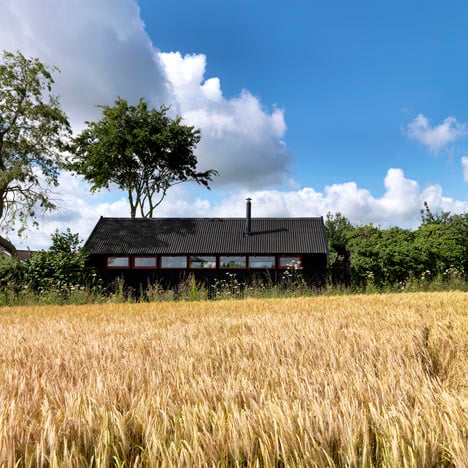 The Long Studio by Threefold Architects

The four buildings containing separate studios and homes for both artists are organised around a central courtyard, which provides a private yet communal outdoor space.

"As the one given plot has to accommodate the needs of two different owners, the question of coexistence between the individual expression and the collective shared spatial experience play a decisive role for the design," said the architects.

Solid brick walls facing the street and the adjacent plots maintain privacy for the residents, and match the materials and aesthetic of their neighbours.

The facades of the mirrored back-to-back houses facing the inner courtyard are predominantly windowless, with windows and glass doors incorporated into the south-facing facades looking onto smaller private courtyards.

Both residences feature a two-storey volume between the central courtyard on one side and the private courtyard on the other.

The main living areas are located at ground level, with a master bedroom, guest bedroom and reception space on the first floor of each building.

Connected to the main unit are perpendicular single-storey wings, which flank the private courtyards on one side and contain two further bedrooms.

Each of the studio buildings houses a garage, a spare bedroom and a work space on the ground floor, with the main studios on the upper level.

Angular roof sections with integrated clerestory windows face north and east to allow even daylight into the double-height work spaces.

Photography is by the architects, who sent us the following information:

Two renowned Chinese painters decide to move to the outskirts of Beijing to the artist village Songzhuang in order to live and work in the quiet countryside and in the neighbourhood of many fellow artists.

The design for the studio houses departs from the traditional Chinese Courtyard House Type – not so much in terms of its representation or construction principles, but more in terms of aspects of its spatial performance, namely shelter (shielded outdoor space within the structure and figure), introversion (all openings open towards the inside, not towards the street), degrees of privacy (gradated levels of privacy through the succession of courtyards), orientation (main living spaces with south orientation). These are examined and translated into an architectural Prototype that reconciled 3 different juxtapositions: the inside and the outside, the working and the living, the individual and the collective.

The adaptive figures of the buildings and their specific spatial configurations create differentiated courtyards/ outdoor spaces. The walled exterior shields the building from the outside world, while on the interior the spaces open up into the courtyards. The design task is characterised by two different programs, namely working and living, that are reconciled in one plot by means of the programmatic distribution executed by the prototype clearly separates these two different programs, yet it allows for complex relationships between both to happen through the courtyard spaces. The latter provide the choice of mutual linkage and separation both in temporal as well as spatial terms.

As the one given plot has to accommodate the needs of 2 different owners, the question of coexistence between the individual expression and the collective shared spatial experience play a decisive role for the design. The operative figure of the adaptive prototype caters to this juxtaposition of privacy and individuality on the one hand, and collectivity and publicity on the other, by providing a gradation of differentiated outdoor spaces, that range from private to shared and public ones.