News: the world "needs a food revolution" according to designer Marije Vogelzang, who is to head up a new food department at Design Academy Eindhoven (+ interview).

The Food Non Food department will open at the Dutch design school in September, as part of a shake-up of the school under new creative director Thomas Widdershoven.

The department, the first of its type in the world, will be headed by "eating designer" Vogelzang, who graduated from the school in 2000 and has since pioneered a design-led approach to food.

"There's so much wrong with food at the moment," Vogelzang told Dezeen. "There’s so much going on in the world of food that we need designers to start working on this in a serious way. It is the most rich and important material in the world." 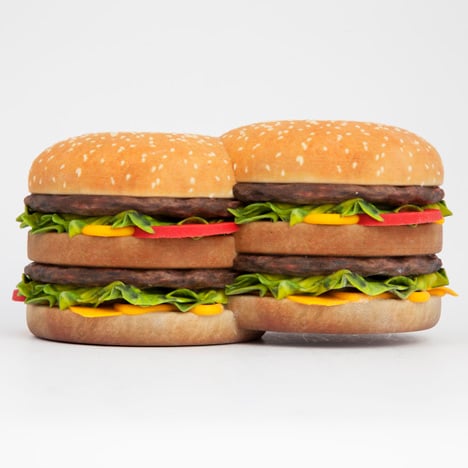 "Food is the next frontier of 3D printing"

Intended to allow mourners to commune with the dead in cultures where white is the colour associated with death, the meal started a trend for colour-coded dining experiences.

Other key early projects by Vogelzang include her 2005 Sharing Dinner, where diners were separated from the table by vertical tablecloths, and her 2006 Connection Dinner, where a tablecloth of dough was cooked overnight by oversized table lamps and then eaten the following evening by diners.

From 2004 to 2011 Vogelzang ran Proef, an experimental restaurant located first in Rotterdam and later in Amsterdam.

"Cooking skills will not be part of the curriculum," said Vogelzang of the new course. "What we will teach is bigger, more holistic and almost impossible to grasp."

"When I think about food I think about something much bigger than only cooking," she added. "Food is agriculture, biology, psychology, transport, human connection, animal connection, waste, health, nurture, nature, science, and also gastronomy."

Vogelzang said she hoped the course would attract young people who want to "change the food chain and to change our perception to food". "I could even say that there might be a food revolution coming up," she said. "And we need one."

The academy is also merging its Man and Living and Man and Public Space department to create a new department called Public Private, headed by Stijn Roodnat.

"The increasing blur between public and private changes the way we should address these two domains," said Roodnat. "Especially in the crossover, on the borders and in the extremes of this new field, we find the challenges where our designers can make a difference."

In 2010 Dezeen teamed up with luxury kitchen applicances brand Scholtès to investigate the growing links between designers and food. Read our Food and Design report here.

Here's a transcript of the interview with Vogelzang:

Marcus Fairs: You were one of the first "food designers" but there is now a lot of interest in this subject. Why is that?

Marije Vogelzang: First, the profession of the designer has changed from shape-maker or product-maker to design-thinker or concept-maker. And second, general interest in food as a subject has grown immensely. When I was a student at the Design Academy, food really was not a serious subject for design.

I think that's fascinating since designers always make things for humans and food is the very first thing a human needs. It’s nice to see this shift in focus in the past 15 years. I think food as a subject is so much rooted in the essence of being that you cannot approach this as just a trend but as a necessity.

Marcus Fairs: How did you get started as a food designer?

Marije Vogelzang: Actually I call myself an "eating designer" since I don't really design food myself. I think food is already perfectly designed by nature. I like to work from the verb of eating.

When I was a student there was no such thing as designing with food. I studied design at the Design Academy Eindhoven and I tried to find the material that I could express myself in best. Eventually I started working with food because it's nice that you can eat it. And it's fascinating that it's ephemeral and that I make a design which you will consequently put in your body.

I did a white funeral meal as my first project and then it took me some time to fully understand the potential of combining design and eating. Now I see that food is connected to everything in the world. That the world is shaped according to what we choose to eat every day. That food is connected to emotions and memories. That food can glue people together but it can also make a separation. Food gives us meaning and nourishment but it can also make us ill. All these things - and many more - are things that inspire me to work with food. It is the most rich and important material in the world.

Marcus Fairs: How will the new course be structured? What will you teach?

Marije Vogelzang: The combination of design and food is still a very new profession. I have been working on this matter now for about 15 years but still I feel there is so much to discover still. The core of the course will be still a design course but specialised in food-related issues. There's so much going on in the world of food that we need designers to start working on this in a serious way.

Food is our biggest economy and it's at the very core of our lives. We - as humans and as a planet - are dependant on a healthy food system in thousands of ways. I don't expect designers can save the world but I do see that our current food system needs designers and design thinking.

Marcus Fairs: Will you teach students how to cook?

Cooking skills will not part of the curriculum. Of course it can happen that cooking is an important part of a project but when I think about food I think about something much bigger than only cooking. Food is agriculture, biology, psychology, transport, human connection, animal connection, waste, health, nurture, nature, science, and also gastronomy. But this part is only one part of the whole package. What we will teach is bigger, more holistic and almost impossible to grasp. But we'll try to make a solid ground for food and design.

Marcus Fairs: Is this the first design school to launch a food department?

Marije Vogelzang: There are more design schools that include food as a topic either in their masters or as separate courses but to my knowledge there's no design school that made a food-related BA department.

Marcus Fairs: What kind of people do you think will be attracted to the course?

Marije Vogelzang: As food is the most basic subject I can imagine it will attract a wide variety of students, since there are so many angles one could approach the subject.

Marcus Fairs: What is wrong with the way food skills are taught at the moment?

Marije Vogelzang: I have no idea. This department is not made to compete with chefs' schools. Being a chef is a completely different profession than being a designer. In this department I wish to make a lot of interdisciplinary connection. I can imagine teaming up with chefs or biologists or psychologists, with dietary specialists or farmers or politicians. The scope really is much wider than only cooking.

Marcus Fairs: What is wrong with food at the moment?

Marije Vogelzang: There's so much wrong with food at the moment. Perhaps it's not only the food. It's also the way we are connected to food. Just a couple of examples: the way we put faith in large companies that produce our food and the way we might not want to engage with food - or dead animals for example.

What we eat right now in one day could be what our ancestors might have had once a year for a big feast. We can eat anything we like at any time of the day. Yet we are spending the least money ever on food. This makes us value food much less than before and causes waste.

We waste about one third of all the food produced in the world. Bees are dying, monocultures are dominating agriculture, knowledge gets lost, many people eat alone and don't know how to cook any more. Kids don't see food growing any more. Our supply of phosphates - an essential ingredient for artificial fertilisers - is running out and without it we might not be able to feed the growing world population. Chicken in intensive farms get more antibiotics than needy children in developing countries. Oceans are damaged, fresh water supplies are getting short, oil is running out.

Fortunately we also see a big group of young people getting into action and trying to find different ways to change the food chain and to change our perception to food. I could even say that there might be a food revolution coming up. And we need one.

Marije Vogelzang: I think if you only think about food design - the actual designing of food - then this is just a small part of the wider approach of food as a subject for design. I do think food design can sometimes be interesting. But in many cases it's used for the wrong purpose - to sell cheap ingredients for big money - but it can also have more value. But as my other answers might already have told you, this course is, in essence, not about food design.

Marcus Fairs: What are the objectives of the course? To make food healthier? To feed the world? To develop new food concepts?

Marije Vogelzang: There's not one objective. We're still trying to define what design with food actually means and how it can contribute to the world. As I said before I do not expect designers to save the world but I do see many possibilities for urgent matters. But I find a more poetic approach to food also interesting. So what we do is to "feed" the students with all the various inputs on food in the broadest sense.

Then next to the solid design background the Design Academy supplies, the students can develop into a specific specialised designer that will have a large open field to work in. And this field will be growing, I'm sure about that.

Marcus Fairs: What else are you working on at the moment?

Marije Vogelzang: I am working on building a new baby girl at the moment! I expect her to be born in about a week. Having children for me is very inspiring when working with this subject. After that I will start the Food Non Food department in Eindhoven, with an excellent team.

And I'm working on a project about rice and memories for SEIBU department store in Tokyo; I'm working on a new cookie brand in the Netherlands and I’m doing some various food related projects for Park Hotels in India. Also I have some lectures planned in different parts of the world.