Three concrete steps lead inside this combined patisserie and wine bar that Case-Real has completed amongst the high-rise blocks of Fukuoka, Japan (+ slideshow).

Case-Real, the architecture studio led by Japanese designer Koichi Futatsumata, designed the small Wine & Sweets Tsumons shop and bar for a client who is both a baker and a sommelier. 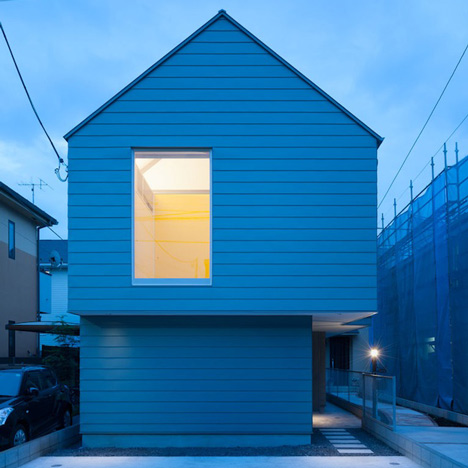 House in Tsurumaki with a hexagonal living room by Case-Real

Despite being surrounded by an assortment of towering office blocks and residential buildings, the client requested "a one-storey oasis in the city jungle", where she could sell both her confectionary and wine.

"As a result of many meetings with her, we decided to create architecture as if it presented her character as an artisan," said the Case-Real team, whose past projects have included a pastry shop and tearoom and a shop-cum-gallery, both also in Fukuoka.

"We aimed at providing architecture which has an earnest and dignified sight, contrasting with the bustle of the city," they said.

The result is a narrow 65-square-metre structure with a shop at the front, a bar in the middle and a kitchen tucked away at the back.

A narrow passage runs along the southern edge of the building. Sheltered beneath the sloping roof, this space sit beneath a row of skylights intended to create the impression of a light-filled courtyard.

"These space compositions allow the shop to retain a calm atmosphere, contrasting with the busy street," said the team. "Additionally, the background of both main spaces becomes an annex letting mild light in."

Climbing plants including ivy are being encouraged to grow up alongside the wall, and eventually extend up over the sloping roof.

"The roof will eventually become another facade and it will have a presence of a spot garden for the people who live in the neighbourhood," added the designers.

Inside, a large concrete platform provides a display counter for a colourful array of cakes, pastries and other sweet treats, protected underneath glass screens.

Bottles of wines and spirits are presented on the opposite wall, slotted between the columns and beams of the building's exposed wooden structure.

A free-standing aggregate wall offers visual separation between the shop and the bar beyond, where furniture by Japanese manufacturer E&Y offers seating for up to eight customers.

Koichi Futatsumata first established Case-Real in 2000, but also designs furniture under his own name, including a mobile made up of steel branches and a vacuum tube amplifier.

Photography is by Hiroshi Mizusaki.

Here is some project data from the architects: