The building by Modostudio provides new headquarters for the Elisabeth and Helmut Uhl Foundation, which aims to foster innovation in society by enabling networking between artists, scientists and different cultures.

It features a series of jagged forms on the top storey, with a shingle-clad dining hall, a glasshouse and a terrace that juts out to the side. Below this, a more traditional two-storey structure houses bedrooms and meeting spaces.

"The intention is to have a place where people from different disciplines – such as mechanical engineers and botanists – can exchange ideas," architect Giorgio Martocchia told Dezeen. 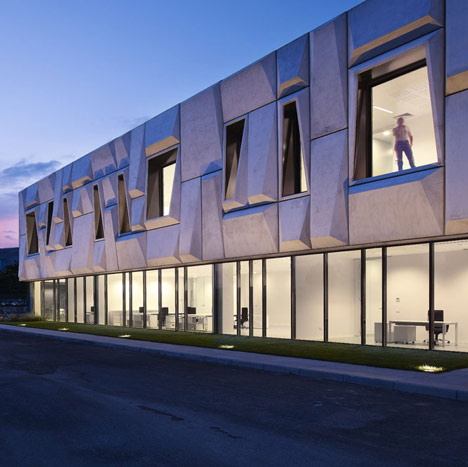 "In this place, there are no conference speeches, but a big room where people can eat and drink and talk in the upper volume, and rooms where they can rest and sleep in the lower squared volume."

A staircase bisects the centre of the building, offering views of the surrounding landscape through large sections of glazing.

"You can experience the landscape even in the very centre of the building," said Martocchia.

"Going down the stairs, you can look directly at the bottom of the valley, and if you look back, you can see the top of the mountain framed by a big skylight. It's like the building is pierced with pictures of the surroundings."

The building replaces a crumbling barn and house that previously sat on the site, and has been designed with the same footprint. It also re-uses some materials from the old buildings, including 200-year-old wood for the flooring.

"We wanted to keep the footprint of the old buildings to avoid any new ground consumption, and to keep the memory of what was there before," said Martocchia.

Larch shingles on the top storey and stone sections on the lower levels provide a reference to the local architectural style.

"We always try to sense the feeling of a place – a pitched roof is not enough," said Martocchia. "And we like the shingles a lot – they will change colour in time, and they have a particular feeling because they are hand-cut, so that the fibres of the wood are kept intact."

The lower levels are built from structural panels using Thoma wood – a high-performance timber that is free from glue and chemicals – and water used for under-floor heating is drawn from a local spring. Hot air from the glasshouse can also be pumped into the building during winter for additional warmth.

Modostudio won a competition to design the new centre for the foundation back in 2009. Changes to the concept design include the exterior walls, which were originally designed entirely in stone but are now partially covered in plaster.

"We found that stone buildings are not so common in the area, except for churches and castles," explained Martocchia.

"We liked the idea of something more friendly, like the plaster, which is used for rural houses in the area. The colour of the plaster is also influenced by the local stones."

Large folding shutters at the front of the top storey were also abandoned in favour of smaller shutters on the windows.

"We changed the openings from the competition proposal because we were afraid they would be too big for a mechanical system," said Martocchia. "There is now a control panel to operate the sliding shutters, so they can be operated all together or singularly."

Photography is by Laura Egger.

Here is some more information from the Modostudio:

The project of the Elisabeth and Helmut Uhl foundation has been realised thanks to a restricted international architectural competition held in 2009, which saw the participation of 15 architectural teams from Italy, Switzerland, Austria and Germany. The aim of the competition was to design a building able to host the activities of the cultural and research foundation.

The building is located in the municipality of Laives, near Bolzano, on a slope of a mountain enjoying a spectacular panoramic view and an amazing surrounding landscape. The project sought to preserve the surrounding environment: the buildings insist on the same footprint of the previous buildings, now demolished.

The project is divided into two buildings: the building foundation and a small building adjacent to it for residential use. The building foundation consists of a series of architectural volumes: a transparent glass and steel volume hosts research activities, a wood cladding volume is used as a leisure and dining hall, while the lower architectural body, on which these volumes are placed, hosts support areas for the activities of the foundation and a wine cellar.

The project aims to express the tension generated by the orographic characteristics of the site and the specific functions of the building foundation: a tension generated by the visual connections between the interior spaces and the external environment. The buildings are designed to protect guests from the particular climatic conditions, but at the same time to let them enjoy the benefits created by the surrounding environment and the wonderful views.

Innovative technology solutions are adopted; the structure of the lower part of the building foundation is made of structural panels with Thoma wood technology while the upper volume hosts a sophisticated opening window system.

The building is classified in Casaclima A with the distinction of having no controlled indoor ventilation, replaced by the possibility of using the hot air generated in the glass volume, acting as a buffer zone. A large tank of 20,000 litres, thermally insulated, is able, supported by a solar heating system and a biomass boiler, to satisfy the radiant heating floor throughout the complex.