News: not content with playing host to the tallest building in the world, Dubai has unveiled plans for the world's first indoor city – a temperature-controlled mega resort featuring a retractable glass roof and the world's largest shopping centre.

Mall of the World is the vision of property developer Dubai Holding and is conceived as a 450-hectare resort, attracting over 180 million visitors each year with the promise of a glitzy theatre district and a gigantic theme park.

At the heart of the proposal is a 750,000-square-metre shopping centre. Designed as a contained street spanning seven kilometres, this space is described by the developer as an alternative experience to the typical Dubai mall.

All facilities will be covered during the stifling summer months – when temperatures can exceed 50 degrees celsius. But thanks to a retractable glass roof, they can be exposed to fresh air in the cooler winter season.

This will ensure that guests can "enjoy a week-long stay without the need to leave the city or use a car".

"We plan to transform Dubai into a cultural, tourist and economic hub for the two billion people living in the region around us," said Dubai president Mohammed Bin Rashid at the project launch. "And we are determined to achieve our vision." 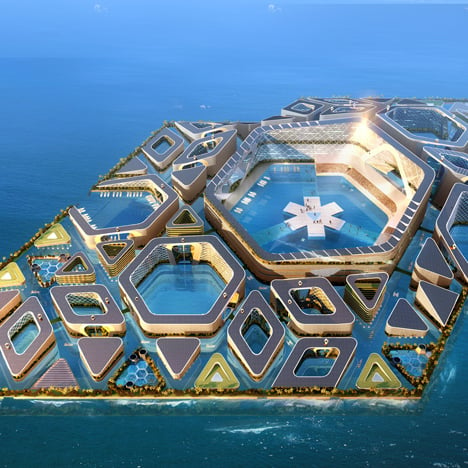 As well as the extensive shopping district, the proposal features a theatre district modelled on London's West End and New York's Broadway, as well as a "celebration district" designed in the vein of La Rambla in Barcelona.

These will be accompanied by over 100 hotels and serviced apartment buildings, plus a health resort offering everything from general medicine to rejuvenation and cosmetic surgery.

"Our ambitions are higher than having seasonal tourism. Tourism is key driver of our economy and we aim to make the UAE an attractive destination all year long," said Sheikh Mohammed.

The indoor city marks a return to the headline-grabbing projects that regularly came out of the Arab state before the recession.

Dubai has boasted the world's tallest building for over four years – the 828-metre Burj Khalifa – and is also home to the planet's largest flower garden and biggest aquarium.

Dubai Holding chairman Mohammed Abdullah Al Gergawi described the project as "an innovative concept" that will "strengthen Dubai's appeal as a tourism hub".

"This project is a product of extensive research studying international and regional tourists' requirements and preferences," he said. "The objective is to create an integrated city with a plethora of best-in-class options within pleasant environments."

Mall of the World is set to be constructed along Sheikh Zayed Road, not far from the 2005-built Mall of the Emirates, which features an indoor ski slope.