Mole Architects based the shape and proportions of this rural home in Suffolk on the classical vicar's residences that are typically found in English countryside towns (+ slideshow).

Like most rectories, the house is located on the edge of a village, so Cambridge studio Mole Architects decided to work to similar design principles, creating a two-storey split-level residence with a square plan and a strong roofline. 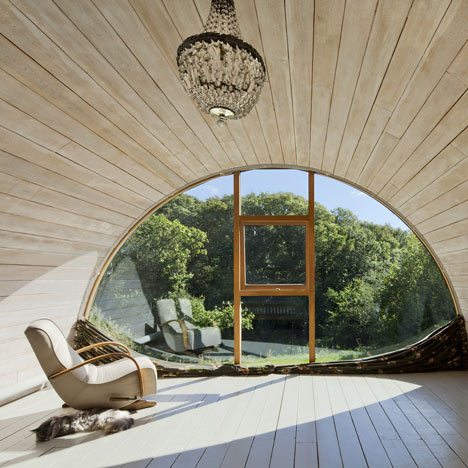 With a nod to neighbouring farmhouses, the building also features several agricultural references, from its exposed timber framework to the name Stackyard.

"The house takes its name from the agricultural enclosure typical to the area, which is used to store sheafs of corn," said Mole Architects, whose past projects include a barrel-vaulted farmhouse extension and a residence with a zigzagging roof.

The boxy structure provides a home for a retiring couple, whose main request was for a space where they could observe nature and the changing seasons.

To accommodate this, the architects broke away from the symmetrical elevations that characterise most rectories, creating large picture windows in the ground-floor living room and top-floor bedroom.

According to Mole Architects, this "gives the elevations a less formal appearance".

The base of the house is built from in-situ concrete, which reveals itself on two elevations. The rest of the exterior is clad with horizontal lengths of cedar that have already taken on a silvery grey colour.

The house's main entrance is located on the south-east elevation and includes a ramp that allows for possible wheelchair access. It leads through to a double-height atrium with a staircase at its centre.

The kitchen and dining area occupy one open-plan space at the southern end of the house, while the living room and a small study are tucked away the back, a few steps higher up.

The master bedroom and bathroom are the only rooms on the top floor and sit above the level of roof parapet to make the space feel like "a retreat and hide". Two spare bedrooms occupy the basement.

Wooden ceiling beams are left exposed throughout the interior, drawing attention to the high ceilings and resonating with the timber furniture and joinery.

The house is accompanied by a single-storey shed that is used as a workshop and model-making studio.

Photography is by David Butler.