Artist James Bridle has teamed up with architecture studio TDO to build a rooftop hangar on a south London car park, from which a military surveillance balloon makes a daily flight to snoop on the area (+ movie).

Loaded with an assortment of cameras, transmitters and tracking devices, the balloon monitors its surroundings, but instead of feeding information to a private organisation, the findings are shared with the public over the internet. 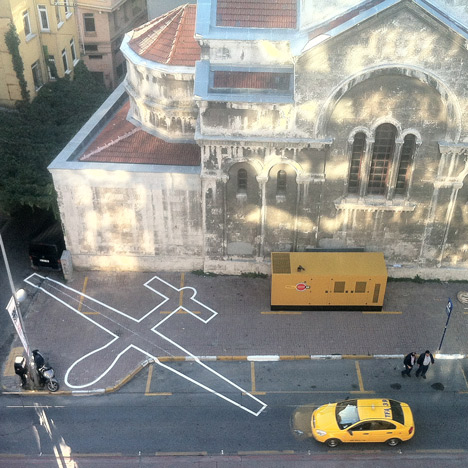 "It feels like surveillance footage, but what I'm trying to do with the project is open that up and give it to all people," explained James Bridle, whose work regularly explores alternative applications of technology.

Named The Right to Flight, the project takes place on the rooftop of a disused multi-storey car park in Peckham, better known as the summertime venue of Frank's Cafe.

Here, Bridle worked with south London studio TDO to design a trio of cylindrical structures, providing a technical workshop, a public exhibition space and a rooftop hangar from which the inflatable will be launched.

"Inspired by James' work and his interests in appropriating existing technologies, we investigated how to achieve large and quickly deployable structures from which a balloon could be launched," explained Doug Hodgson, one of TDO's three co-founders.

The three cylinders frame a outdoor platform, where visitors can observe the launches whilst also taking in the London skyline.

"It's a really key part of the project that these structures feel very open and very accessible to people," said Bridle.

Over the course of the installation, which runs from June until September, the balloon will be launched daily with different types of electronic cargo and the public will be able to make their own suggestions.

Examples include an aerial camera, which Bridle is using to develop a series of abstract films. There is also a hacked Wi-Fi router, a darknet message board and a ham radio transmitter.

The artist named the project after a quote from 19th-century  photographer and balloonist Nadar, who proclaimed that mankind had a right, even a duty, to ascend to the heavens, and who became the first person in history to produce aerial photography.

"The Right to Flight will investigate ways to return the powers of  surveillance and omniscience to the surveilled, and attempt to rediscover Nadar's  utopias in the possibilities of contemporary technologies, while making its own claim  on London's increasingly crowded skyline," he said.

The installation is open until 21 September as part of the Bold Tendencies art programme.

Photography and movie are by Ben Blossom.