Quintus Kropholler's Black Gold collection comprises eight objects: two bowls, two vases, a side table, a bookstand, a small tray, and a pyramid, as well as the prototype for a bench. 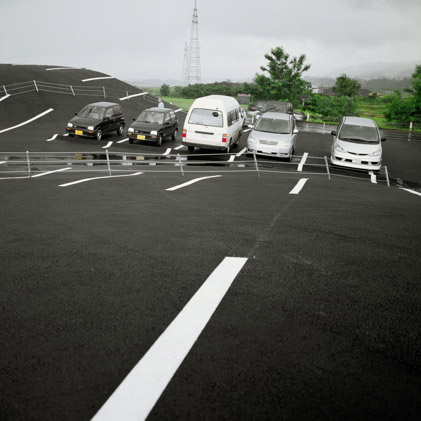 Each is made from asphalt – a sticky, black, viscous liquid form of petroleum – mixed with rock fragments to create asphalt concrete, also known as tarmac and more commonly used for surfacing roads, pavements, car parks and airport runways.

"Asphalt is a ubiquitous material in our urban fabric," said Kropholler. "It is everywhere, but since it is only regarded in purely functional terms its potential remains unseen."

"If we take a second look, asphalt has rather unique properties and aesthetic qualities," he added. "One can simply call it beautiful."

The objects were cast in steel moulds at 180 degrees centigrade, which were then pressed to bind and solidify the material.

Each was formed from a different chemical mixture, modified from standard asphalt to make them more durable. The materials were then cut, milled and drilled on computer numerically controlled (CNC) devices into the final pieces.

Kropholler hopes that creating "luxury" items from this finite material will highlight its value and provide a more tangible awareness of the environmental issues that surround it.

"With the Black Gold objects I intend not only to show an aesthetic that has been overlooked for almost a century, manifesting the capabilities of the material and it's industry of today, but rather aim to show, and reflect upon, a piece of our current consumer society that in time will cease to exist," the designer told Dezeen.

He designed the objects to have a longer lifespan than traditional oil-based products such as fuel and plastics, and even the oil industry itself.

"These objects are designed to outlive this resource's lifespan, becoming a future monument of today and its passing centuries of oil driven industry and economy, challenging the system of supply and demand from which petroleum earned its name Black Gold," Kropholler said.

Black Gold was presented during Milan design week 2014 in April.

University of Brighton graduate Josh Bitelli also made a series of furniture and vases from asphalt and road-marking paint, moulding the material over metal pipes.