Designed by Auer Weber for the European Organisation for Astronomical Research in the Southern Hemisphere (ESO), the new buildings extend an existing headquarters in the Munich suburb of Garching, which were first completed in 1980 by German studio Fehling+Gogel.

The original campus was designed as a series of interlocking curves that create sheltered courtyards, with the main library, lecture halls and meeting rooms connected by stairs and bridges at different levels.

The new additions continue this rounded aesthetic. A sinuous structure comprising three interconnected circles houses a conference centre and offices, which are raised above ground level on what appears to be huge tapered columns. 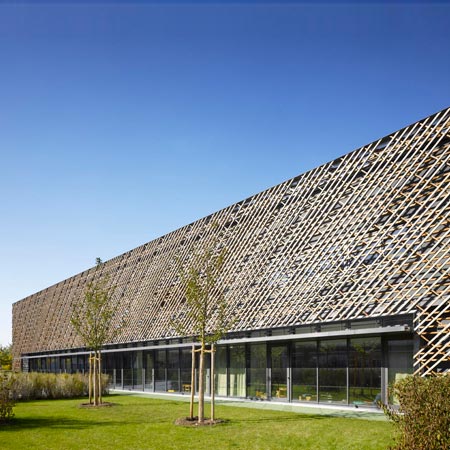 "The architectural concept for the extension buildings takes into account both the established green belt beyond the southern border of the research campus and the extrovert character of the existing headquarters building," said the architects. "The result is open and individual buildings that blend both functionally and formally."

One of the over-sized concrete columns contains the auditorium, while the others surround courtyards that can be viewed from the offices and meeting rooms on the first and second floors.

"The curved shape of the extension building with its fully glazed facade provides the illusion of a structure floating above ground on its inclined clad supports," said the architects.

Glazing envelopes the first and second storeys, reflecting the surrounding landscape during the day and producing a continuous surface of light when illuminated at night. "The building appears as a flying saucer ready to lift off," said the designers.

A separate cylindrical building contains a production facility for scientific instruments, including the European Extremely Large Telescope (E-ELT). The 39-metre diameter of the E-ELT determined the dimensions of this particular structure.

As the main entrance and facilities of the existing headquarters are located on the first floor, the main floors of the new buildings are raised to the same height and connected to it by elevated corridors.

These walkways create a three-way circulation route that is raised on slender columns above planted gardens, pathways and seating areas.

An auditorium, cafeteria and the council room are situated on the first floor of the larger new building, close to the bridge to enhance the connection with the main headquarters.

Reading areas and other meeting points are positioned around two circular glazed openings that punctuate both of the upper storeys and allow daylight to reach the surrounding interior spaces.

The periphery of the meandering structure is occupied by offices that look out onto the surrounding countryside.

Auer Weber has offices in Munich and Stuttgart. Other projects by the firm include the Chilean hotel that featured in the James Bond movie Quantum of Solace and a trellis-clad university building outside Munich.

All images are copyright Roland Halbe and used with permission.