This sculptural bamboo entrance designed for a Chinese flower garden was the first-ever project by architecture studio Penda, who this week unveiled a concept for a modular bamboo hotel (+ slideshow).

Penda founders Dayong Sun and Chris Precht won a design competition in 2013 with their Blossom Gate proposal, which is designed as the gateway to the largest myrtle flower garden in the city of Xiangyiang, Hubei Province.

The architects wanted the structure to do more than simply provide an entrance. They sought to reinvent the gate as an architectural landmark of its own, offering a gathering place for visitors. 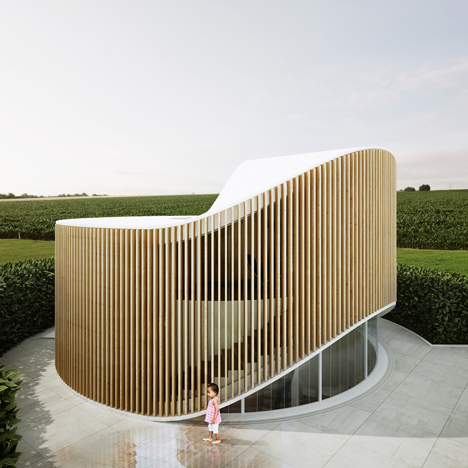 "As a typology, the main function of a gate is a dividing one, separating the inside from the outside. On the other hand, a gate is also a connecting element, guiding people to a point where the inside and the outside get unified," said Sun and Precht in their accompanying statement.

The most striking feature of the design is the sweeping bamboo form, which was based on both the smooth lines of Chinese calligraphy and the petals of a blossoming myrtle flower.

Overlapping lengths of bamboo would create the outlines of the two large petal shapes, concealing a zigzagging internal framework.

The architects described their technique as "translating the beauty of a brushstroke into an architectural landmark".

"Some might see it as a symbol of a flower, others might interpret it as wings, a traditional Chinese mask or a heart," they said.

Staircases at the base of the structure would double up as seating areas, allowing the gate to be used for talks, performances or as a cinema. Penda also suggested hosting a Sunday market underneath.

A reworked version of the Blossom Gate is currently under construction and is due for completion in the autumn.