Following a series of unrealised proposals for conventional swimming pools in the town, Herzog & de Meuron developed the design for the Naturbad Riehen in the spirit of Badi – the traditional wooden pools that sit within the Rhine river.

The result is an outdoor pool that offers bathers the experience of swimming in a naturally filtrated lake, kept clean using water plants as well as layers of gravel, sand and soil, rather than with machinery and chemicals. 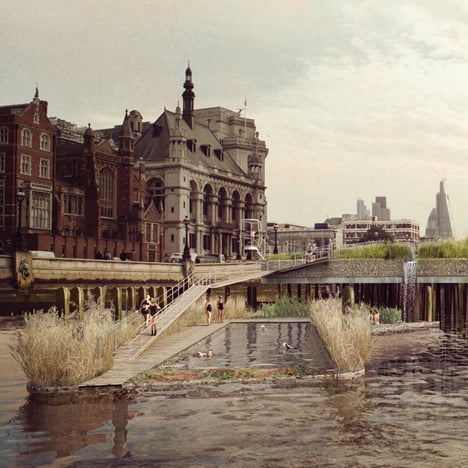 "The standard geometric swimming pool transforms into a bathing lake where the technical systems and machine rooms vanish, to be substituted by planted filtering cascades," said Herzog & de Meuron.

The Swiss architects first won a competition to create a swimming pool in Riehen in 1979. This never materialised but, according to the designers, the desire for swimming facilities remained among local residents.

As the traditional riverside baths became more and more obsolete, several more proposals came and went, until the designers eventually came up with their plan to create a natural pool.

"The changed perspectives brought by the intervening years prompted the idea of abandoning the conventional pool concept with its mechanical and chemical water treatment systems in favour of a pool closer to a natural condition," said the team.

"This concept led to the notion of modelling the natural pool on the local Badi, which combine a lively atmosphere with a timeless appearance," they explained.

The new pool is located on the north bank of the River Wiese, which meets the Rhine in Basel. It can accommodate up to 2,000 bathers per day, and features indoor changing facilities and a waterside cafe.

Built from larch wood, the amenities building runs along the eastern side of the site, serving as the main entrance. It adjoins a fence built from the same material, which extends around the northern and western boundaries to offer sheltered seating areas and showers for bathers.

"From all parts of the facility, attention is focused on the bathing pond at the centre of the site," said the design team.

The southern boundary along the river's edge is screened only by plants, allowing swimmers to look out over the neighbouring waters.

Biological water-treatment basins contain the plants used as part of the organic filtration system. These are located on the opposite side of the road, embedded into the landscape of a parkland site that is in use all year round.

Natural pools are becoming increasingly popular in Europe, although the Naturbad Riehen is the one of the first to be designed by a well-known architect. Harbour-side baths have also been gaining popularity ever since JDS Architects installed recreational bathing facilities along Copenhagen's waterfront in 2002.

There are now a number of outlandish projects in the pipeline. London-based Studio Octopi is moving forward with a concept to offer swimming in the River Thames, while a team of Danish architects is planning to extend Copenhagen's offering with a series of artificial islands.

All photographs are copyright Leonardo Finotti and used with permission.