The spokes that cover the front of Sebastian Errazuriz's Samurai Cabinet are angled and pivoted so that sliding a finger down the corner of the cabinet flips each one open in turn, revealing the glass shelves inside. 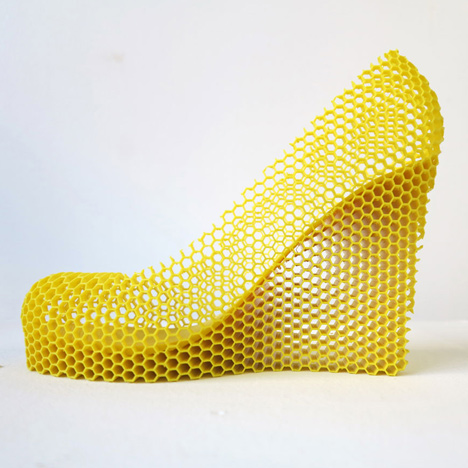 The cabinet's spikey exterior is intended to evoke a sense of protecting what's inside. Rather than a natural defence mechanism, the design references Japanese Samurai armour.

"I have some memories of beautiful museum Japanese Samurai armours burnt into my head that often appear in my sketches," Errazuriz told Dezeen. "The multiple movable layers of black leather are both aesthetically fascinating and inspiring to me.

"The two outward pointing spikes of the helmet have always seemed odd yet very attractive," he continued. "I wanted the cabinet to offer an old feeling that could include some sense of Asian aesthetic and have the different shapes feel like waves of fabric or hundreds of arrows."

Standing 181 centimetres high, 55 centimetres wide and 44 centimetres deep, the Samurai Cabinet was fabricated at Errazuriz's in-house workshop from lacquered maple, chosen for its lightness, stability and relative freedom from knots.

The cabinet is a continuation of Errazuriz's use of furniture as a medium for art exploring spikes and movement, with previous examples including his Magistral Cabinet, Piano Shelf and Porcupine Cabinet.

"For the Samurai Cabinet we tripled the number of spokes of the previous Porcupine Cabinet and on this occasion focused on adding the possibility of allowing the cabinet to be opened effortlessly by simply swiping a finger down its edge," he said. "The keels follow the movement of the finger and open in a really beautiful organic flowing way that is very satisfying for the user."

The designer previously 3D-printed 12 shoes to represent 12 of his lovers, which he presented at Design Miami last year.