New York artist and designer Sebastian Errazuriz has created a sculptural wooden cabinet that slides apart to look like it has exploded (+ slideshow).

Sebastian Errazuriz's Explosion Cabinet first appears to be a simple wooden box with glass ends and a stainless steel base. 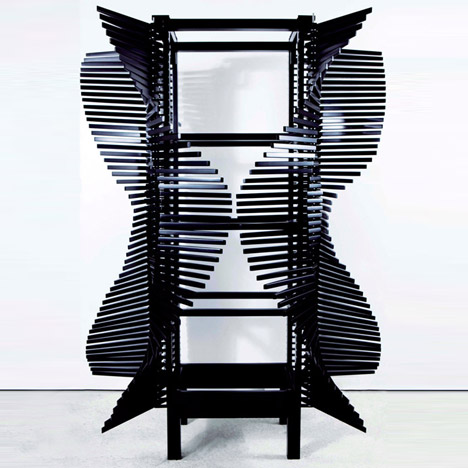 However, sections at the front, back and top open with a push that triggers the movement of a series of slats that extend out from the main structure to make it appear as if the object has been frozen mid-explosion.

The design is divided by a central seam, with rows of maplewood slats on the longer sides and top meeting in the middle.

A system of sliding dovetail joints allows the slats to be pulled or pushed outward, with central elements extending the furthest and adjacent pieces staggering back towards the centre.

"With a gentle push, the rails slide further and further open until it seems that the cabinet has exploded beyond the bounds of stability," said Errazuriz.

Despite utilising a joint commonly used by cabinet makers, the mechanics of the kinetic parts took over a year to perfect.

Completed last year, the design has been acquired by the Carnegie Museum of Art, Pittsburgh, ahead of a solo exhibition of Errazuriz's work called Look Again, which will open in September.

Exhibition curator Rachel Delphia described the cabinet as "a beautiful, surprising, and confounding work that represents the playful conceit of the master cabinetmaker showing off."

His other projects include a cabinet resembling traditional Japanese Samurai armour and a series of 3D-printed shoes inspired by 12 of his former lovers.