Larch cladding has been painted black to create a uniform appearance for this seaside home on the Isle of Wight, England, by Dow Jones Architects (+ slideshow).

The Sett by London-based Dow Jones Architects is located in the village of Totland and takes inspiration from black-painted fishermen's sheds on a nearby beach, which feature a thick, slightly reflective coating that would normally be used to protect boats. 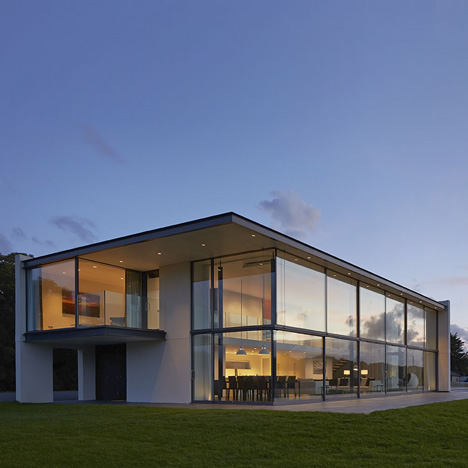 "The cladding is Siberian larch, which is naturally yellow-green, and the windows are sapele wood, which is a dark red-chocolate colour, so we wanted the exterior to have a uniformity so you read the formal qualities of the composition, and not the materials," architect Alun Jones told Dezeen.

The two-storey house was built for a family of four on a former orchard, and is designed to frame views of surrounding fruit trees, including an inner courtyard set around an apple tree.

"When we first visited the site we had to climb into it through the perimeter of trees and undergrowth," said Jones. "Once inside, it felt like a secret garden or a found room, so it was important to structure views within this internalised world to emphasise the qualities of this place."

Rooms on the ground floor have been arranged to create a variety of relationships with the site. The kitchen at the front faces east to catch morning light, the living room faces south to catch light throughout the day, and the dining room faces west for evening sun. A study, guest room and utility room also fan off around the edges of these core spaces.

"We wanted to make a house that felt more expansive and connected to the site than it would as a single rectangular volume," explained Jones. "Our approach was to make each of the rooms, which are used for different things at different times of the day, have a particular relationship with the site and the passage of the sun."

Windows on the ground floor have been arranged to create views through the house, including a clear line of sight from the entrance hall, through the apple tree courtyard, to the back garden.

"As you walk in you then get the diagonal views that join the spaces together," said Jones. "This sense of an unfolding mystery – of spaces beyond spaces, and light appearing around corners – makes the building feel a lot bigger than it actually is."

Colonnaded verandas with timber posts around the ground floor are designed to echo the surrounding trees, and provide sheltered spaces to sit at different times of the day.

On the top floor, stairs open up to a large landing and playroom that offers views of the sea, with three bedrooms, a study and a bathroom arranged around it.

"The playroom is the pause in the plan," said Jones. "The children's bedrooms are not that big, so we made this big landing as a shared place for them, where they can play, do homework, and watch the sun dip into the sea."

The house was constructed with a prefabricated timber frame, and features concrete flooring throughout the interior and exterior spaces, laid in panels so it could be hand trowelled by a plasterer.

The chimney breast is built with inexpensive bricks and has been smeared with concrete slurry with a clear seal to give the wall a more uniform appearance, similar to the concrete floor.

Joinery throughout the house, including large pivoting doors that close off the study and the kitchen, is made from Douglas fir, which will become redder and darker over time.

"As with all of our projects, we are interested in using very few materials and making the most out of them," said Jones.