Dutch architecture office Heren 5 has collaborated with artist Boris Tellegen to integrate a seven-storey brick artwork into the facade of this housing complex in Haarlem, the Netherlands (+ slideshow).

Heren 5 and Boris Tellegen used yellow, grey and blue-green bricks to create jagged shapes that disrupt the surface of Huis van Hendrik, or House of Hendrik, a new housing complex in a neighbourhood of Haarlem surrounded by post-war apartment blocks. 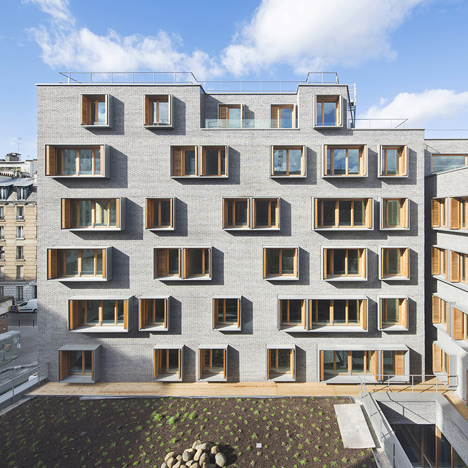 "The idea comes from the location in a post-war 1950s housing district, where the use of art was common in architecture," architect Sjuul Cluitmans told Dezeen.

Boris Tellegen – also known as Delta – originally started as a graffiti artist in the 1980s before studying architecture and design. His work is characterised by flat surfaces that are layered to create three-dimensional forms or eroded to reveal hidden layers.

For Huis van Hendrik, Tellegen and Heren 5 created a pattern based on isometric drawings of towers, which were developed into a digital model and built by two masons, who worked on the project for three months.

"Our client, Ymere, believes it's important to use art as an enrichment of the built environment," said Cluitmans. "Boris Tellegen was chosen because his work reflects the architecture of the building and its context, and strengthens them together."

The complex is arranged in an L-shape around a street corner and houses 106 apartments, each around 90 square metres. It features a crinkled facade, designed to be sympathetic to the curve of the street and the housing block next door, and a variety of levels that step up and down, in order to break down the building's mass.

Behind the street, the L-shaped building encloses a communal garden designed by Buro Mien Ruys, which provides access to a mixture of open and enclosed spaces.

"The concept for the garden was to create a warm nest for the residents and the neighbourhood, with trees and hedges providing the structure," said Cluitmans.

Access to the apartments is through open corridors along the exterior of the building, which were designed to provide a more gradual transition between public and private spaces.

"We designed the corridors along the exterior to give the building a relationship with the public space and the street," said Cluitmans. "As architects, we are committed to good transitions between public and private space."

Photography is by Bas Uterwijk.