Steel triangles protruded from a waterfall in central France to intervene with the cascade of water in this installation by artist Laurent Gongora.

Laurent Gongora attached 24 metal elements to the rock behind the Cascade de Vaucoux in France's mountainous Massif Central region to "redraw" the shape of the waterfall. 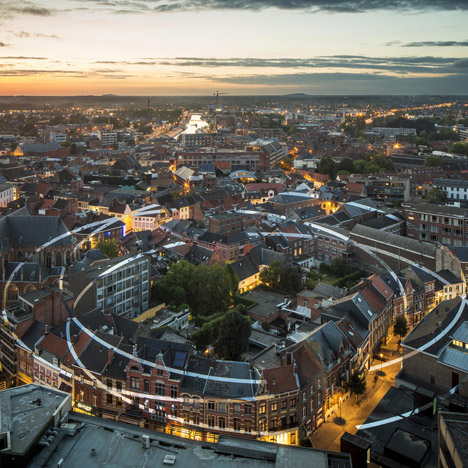 Arranged in an eight-metre-high diamond formation, the pointed shapes stuck out through the falling water and diverted the torrent over their tops.

"Looking at this huge cascade, I thought it would be interesting to tame the way water is falling," Gongora told Dezeen. "The graphics of the basaltic rocks around the waterfall made me want to build something very geometric."

The project's title, Les Cascadeurs, translates as "the stuntmen" and also relates to the French word for "waterfall".

The small roofs were coloured black to match the local stone and were fixed onto a steel base frame hidden by the water.

Horizonal bars beneath each peak were designed for daredevil wildlife to take shelter from the cascade. "There is a small wooden perch under each roof, in case a 'stunt bird' would like to come and shelter," Gongora explained.

Gongora worked with two climbers over three days to hang the structure from rocks and trees above the site using six steel cables.

The piece was installed for the annual Horizons Sancy art and nature festival in 2012.