Lithuanian designer Ingrida Kazenaite has developed a conceptual pen that would mend damaged clothes by "printing" over rips and tears.

Ingrida Kazenaite invented the wand-shaped device to repair old garments, so the wearer wouldn't have to throw them away as regularly. 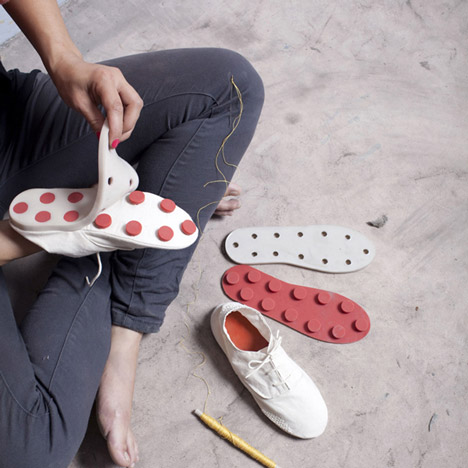 Repair It Yourself by Eugenia Morpurgo

"For most of us sewing and taking care of our fabrics is not a pleasurable activity," said Kazenaite. "Fabric Pen concept is meant to take care of all that for you while letting you express yourself through the process of creation of your clothes."

One end of the pen would scan the fabric to match the colour and texture, then the other end would spray the fibres onto the garment. Buttons on the case would allow the user to switch between the two functions.

"I can see something like this being manufactured in the next few years for cotton or polyester clothes, or to stop runs in tights or repair nylon," Kazenaite told Dezeen.

The concept is based on an existing spray-on fabric called Fabrican, which forms a non-woven layer of cross-linking fibres when applied.

Kazenaite's development involves the use of nanotechnology to make composite fabrics based on the clothing of the owner.

After scanning the pen would mix the molecular ingredients, like cellulose for cotton or polymer for synthetic fibres, and pigments needed to replicate the chosen material.

Nanoparticles in the fibres would make the repaired sections water and dirt resistant, as well as reduce odours trapped in the material, according to the designer.

"Building on the idea of a unified fabric particle delivery system as a way of creating fabric and an interest in sustainability, the Fabric Pen is developed to harness advances in 3D tech as a way to reduce waste," she said.

She proposes to make the body of the pen from bioplastics so it could be recyclable and degradable.

A clear element on the underside of the device would denote the cartridge for the particles, which could be replaced if it runs out or a different colour is needed.

Kazenaite believes that the technology could also be developed for medical uses, printing bandages or plasters onto the skin, or for other types of textile.

"The concept of fabric pen of course is most appealing to the regular consumer as a clothes mending product, but the usage of such product could be expanded way beyond that," she said. "Like the medical industry as a part of first aid kit to print a cast or a sterile bandage or in a business to retouch and repair upholstery, tents or other textile-based products."

Fabric Pen has reached the third stage of a competition for design and technology students run by Swedish product company Electrolux.