Waves of gold-coloured steel create a shell around this hotel in Swiss ski resort Davos by Munich architects Oikios (+ slideshow).

Oliver Hofmeister of Oikios led a team of design studios to create the complex facade of the InterContinental Davos Hotel in the Alpine town. 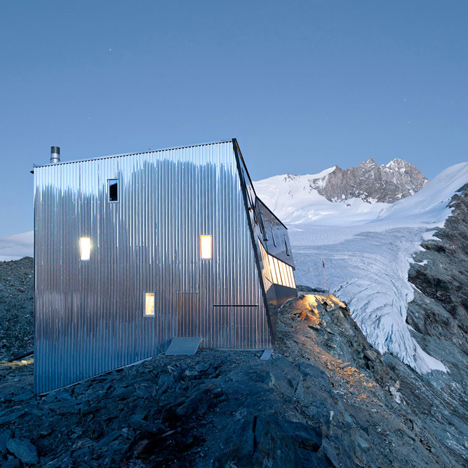 "Seen in the light of the budget available and the high quality demands, many experts had first deemed the facade 'unbuildable'," the architects said.

Undulating sections overlap slightly as they curve around the domed building. The designers said that the shape was based on a pine cone found in the nearby forest.

The waves create openings in the facade around the balconies for the 216 rooms and 38 residences, framing views of the mountains across the valley.

"The undulating envelope wraps itself tightly around the structure, leading to an interplay between open and closed surfaces which appears different from every angle," said the architects.

Over 790 steel panels are mounted onto a gridded frame of squares, made up of primary and secondary ribs that create the three-dimensional curvature.

Three-millimetre sheet steel, with a champagne-coloured metallic coating, was chosen over aluminium as it was cheaper and less susceptible to changes in length that occur with temperature fluctuations.

The panels were manufactured in the Czech Republic and transported to Davos by road, secured in bespoke frames.

Inside, facilities include a restaurant, conference rooms and a sky lounge on the 10th floor, with interiors by Swedish firm Living Design.

A 1,200-square-metre spa features 12 treatment rooms, a fitness area, a hairdresser, an indoor and outdoor swimming pool, rest rooms and a sauna area.

Other hotels with interesting facades include Zaha Hadid's 40-storey building with an exposed exoskeleton in Macau and Jean Nouvel's tower in Barcelona that is punctured by windows shaped like palm fronds.

Photography is by René Müller.