An undulating canopy of lights was strung between two docks to create this installation at a French harbour by architects Marion Moustey and Alexandre Arcens (+ slideshow).

Marion Moustey and Alexandre Arcens created the Sensual Wave installation in a mooring spot for yachts at Quai Charles de Gaulle, on the waterfront of La Grande-Motte in southern France. 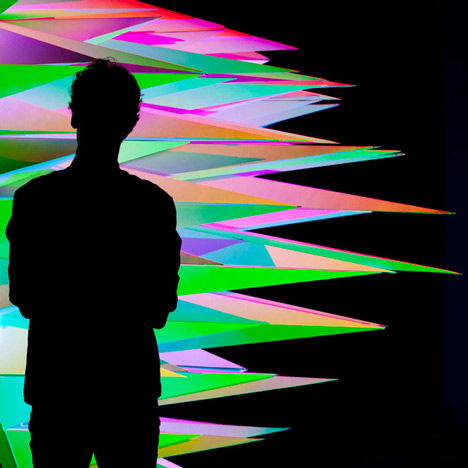 The project was designed for the Festival des Architectures Vives, which took place across the town La Grande-Motte from 21 to 29 June.

"The theme of the festival was Sensuality," said Moustey. "The idea of the wave appeared really quickly because it could make echoes with both the waves from the port and the body of a woman curving in an abstract way."

To create the effect, a series of wooden posts were positioned along the edges of two parallel docks.

The heights of the evenly spaced poles varied to create the shape of a wave on one side and its inverse opposite.

Thin strings with different-sized lights spaced randomly along their lengths were strung between each pair of posts, forming a gently undulating canopy of light just above the water.

"The Sensual Wave plays with water, without ever touching it, brushes it, goes away from it," said the duo. "As a magical moment, the ephemeral character of the installation evokes a waves that we can't hold back."

Lace was wrapped around 160 spherical wire-framed lampshades, which the architects sourced from various shops.

"The spheres, dressed in embroidery, open a dialogue between full and void," said the designers. "Indeed, the texture of the lace creates a game of shadow and light."

The lights were reflected in the calm water at night, when sensors automatically illuminated the installation using stored solar energy.

Photography is by Paul Kozlowski.