French studio CUT Architectures have used a steel grid structure to create shelving, seating areas, a kitchen and a climbing frame for this apartment renovation in Paris' 6th arrondissement (+ slideshow).

CUT Architectures remodelled the interior of the second-floor apartment for the client, his wife and two children, who requested a completely different feel from the existing apartment.

"Retrieving the apartment he grew up in, our client commissioned us to reshape the flat so he would feel like being in a totally different place," said the architects. 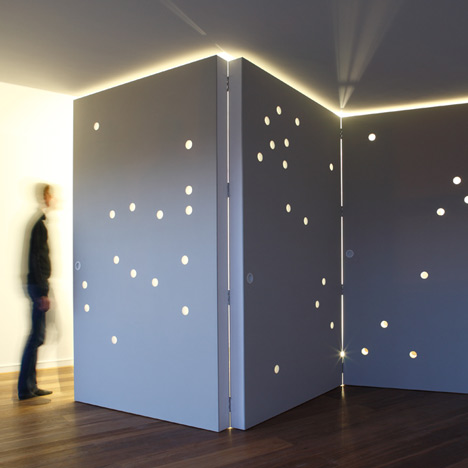 Apartment for a dancer and choreographer by CUT Architectures

The apartment is located in a 19th century building with a U-shaped floor plan that wraps around a courtyard.

CUT Architectures decided to remove the old partition walls, strip the wallpaper and repaint the walls white to create the feeling of more space. The original timber parquet floors were sanded and the existing doors, windows and fireplaces were retained.

The architects designed a simple steel grid structure that could be adapted and used throughout the apartment to create continuity. Two large versions were installed in the living room and kitchen, along the wall where the servants corridor once was.

In the living room, wooden shelves and cabinets were inserted to create areas that can be used as bookcases, seating or simply a climbing frame by the children.

"In the kitchen, [the grid] integrates shelving, cupboards and a worktop with a sink and a hob," Yann Martin told Dezeen. "One part of the structure is on wheels to become a mobile worktop so the whole family can cook together."

The south wing of the apartment has been dedicated to the children, with a playroom and two bedrooms.

A bathroom and a toilet are located off this space, with doors hidden in a wooden partition wall. In the middle of the wall is a two-way mirror that brings light into the bathroom and allows views out into the playroom area. The grid structure is used in the bathroom as the base for two sinks with shelving underneath, opposite is a fireplace with a mirror above.

"In order to give natural light to the bathroom and yet to preserve intimacy within it we designed a partition wall with integrated doors and a huge two-way mirror," said Martin. "The semi-reflecting transparency gives privacy to the bathroom users and offers a game of infinite reflections when between the mirror in the bathroom and the windows in the playground area."

The clients are in the process of transforming the adjacent studio into a private suite, which will occupy the north wing.

CUT Architectures was set up by Benjamin Clarens and Yann Martin in 2005. Other projects in Paris by CUT Architectures include an apartment with perforated folding screens, and a house extension with a glass-fronted music room.