Designer Sammy Jobbins Wells has stretched material made by bacteria over structural frames to create a set of wearable objects (+ slideshow).

Sammy Jobbins Wells' Skin project involved growing bacterially produced cellulose, started with a culture from a kombucha mushroom that she bought from an internet retailer. 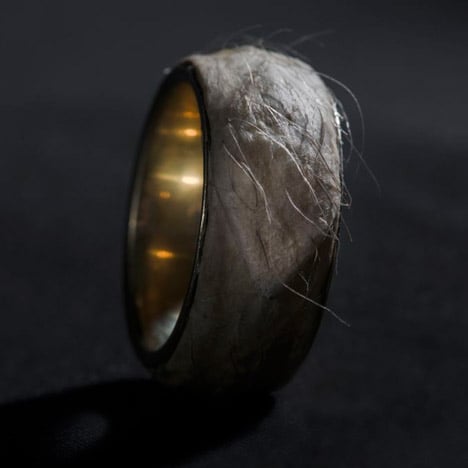 Forget Me Knot by Sruli Recht

"Acetobacter bacteria spins cellulose – a by product – as it consumes glucose, the reasons for which are unclear but it is thought the material might protect the bacteria colony from external contamination," Jobbins Wells told Dezeen.

The result is a flexible organic material that contracts and hardens around a physical form as it dries, mimicking skin stretched over bone.

"When wet, the cellulose is incredibly flexible and tensile and it is incredibly difficult to pull material with a thickness of more than two millimetres apart," said Jobbins Wells.

"When dry, the material maintains a large degree of its strength but has a strange, leathery feel, almost like old human skin."

To create the material, the bacteria requires specific conditions. A solution of glucose and tea is mixed with water and kept at room temperature for optimum growth.

The tea provides added nutrients for the bacteria and also gives colour to the end material.

"I discovered that regular, white Japanese Sencha tea allowed for the greatest transparency seen in the structure," said Jobbins Wells.

Starting with a small jar, the designer harvested and transferred larger and larger cultures over a few months until she had sheets of material grown in a reptile terrarium – enough to create the wearable objects.

"I wanted people to see that this structure had distinctly a digital, rather than an organic, beginning both in its design and generation," she said.

The cellulose material is able to fuse to itself as it dries, so holds in place when wrapped around the frames, which were influenced by animal-bone corsets from the 17th and 18th century.

This creates a set of pieces that wrap around the waist, up the back and over the head.

The project builds on research undertaken by designer Suzanne Lee, who made jackets and shoes from bacterial cellulose that has similar properties to leather.

"Suzanne Lee's Biocouture project gave me the initial inspiration and introduced me to the idea of a bacterial colony being put to work to produce a textile material," Jobbins Wells said.

Although it offers opportunities for textile production, the material is not without its flaws: "Unfortunately, the material in its current form is not waterproof and does eventually return to a wet state upon sustained contact with moisture," said the designer.

"The wearable object serves to stimulate a conversation, debate and even critique over the future implication of bio-materials in the manufacture of physical objects," she added.

Jobbins Wells is currently studying at the University of the Arts in Bremen, Germany.