Narrow strips of steel give an undulating facade to this renovated commercial block in Tokyo by Japanese firm Amano Design Office (+ slideshow).

Architect Yoshihiro Amano came up with the design for the Dear Jingumae Building after being asked to give the existing structure a new frontage that would allow it to stand out from its neighbours.

"We aimed at a design with a soft expression that would be favourably accepted by passersby, while standing out from the surrounding buildings that tended to have physically hard expressions," he explained. 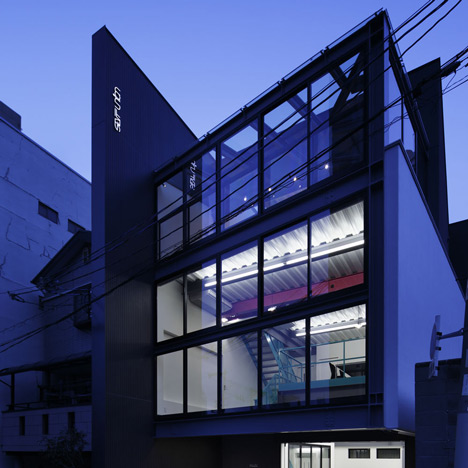 The 25-year-old structure was previously used as an office but will now accommodate a shop on at least one of its floors.

The curving stainless-steel louvres wrap around the upper floors of the three-storey-high structure, creating curves intended by Amano to be reminiscent of soft clothing.

The architect used a computer program to generate the three-dimensional form, which is made up of only two types of radius accompanied by straight lines.

"The louvres give a soft expression by connecting three-dimensionally misaligned radiuses [of the existing structure]," said Amano.

Large windows can be glimpsed through gaps in the louvres, allowing light to filter gently into the building.

"At a time with a feeling of stagnation, we expected the building to create a new relationship with its surroundings, to add variety and a rich expression to the street, and to vitalise the neighbourhood," said Amano.

A external staircase leads up from the facade to the first floor, meeting an internal stairwell connecting all three over-ground storeys with the two basement levels. This allows the building to easily accommodate several tenants.

Fluorescent tubes provide internal lighting and are positioned randomly to give a sense of character to the otherwise simple interior finishes.