Following the destructive earthquake and tsunami of March 2011 that destroyed low-lying areas in the Shimohei District, Van Der Architects was invited to join a group of businesses assembled by the Netherlands chamber of Commerce in Japan to support the reconciliation effort. 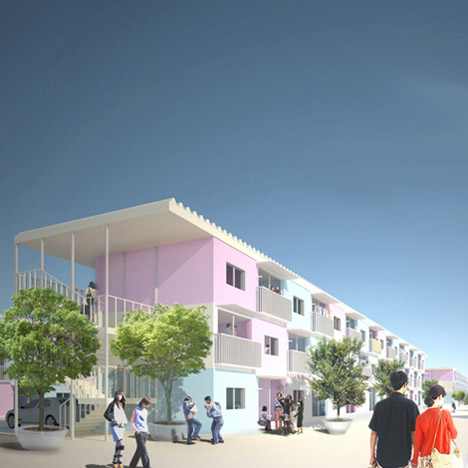 Yamada Bay is the site of an island where a Dutch ship landed in 1643 and the town has maintained strong ties with the Netherlands, which joined other nations in offering aid and resources to help with the rebuild.

Architect Martin van der Linden was asked to design a community centre and after-school facility named Oranda-jima, or Holland Island , after the location where the boat was anchored.

The 200-square-metre structure is designed to accommodate approximately 60 children and provides a variety of play areas and facilities, including a music room and tatami room that can also be used by the community.

Comprising two single-storey wings angled along the edges of a stripy artificial grass play mat, the design features large multipurpose spaces at its centre, with rooms dedicated to specific functions positioned at either end.

"The building follows the programmatic requirements in a linear way, however, instead of designing a long rectangular building we decided to twist the building into itself thus creating a space that feels safe and enclosing," said the architect.

The facility was constructed by a local contractor from timber donated by Canada Wood, an organisation that promotes the use of Canadian lumber in international projects.

"We decided on using wood as, from a design point of view, it expresses well the image that I wanted to create with the building; a simple, silent structure, designed from the inside out," explained Van der Linden.

Large windows along the front of the main hall look out onto a sheltered terrace with a table and benches, which flanks the playground.

The shorter of the two wings houses toilet facilities, a library and a kitchen area. These are lined up along a corridor, flanked by a glass wall that is lined with a translucent and reflective sheet.

During the day, the wall provides gentle reflections of the playground, while at night illumination from within casts shadows onto the surface.

A library space at the end of the corridor features a skylight and a window covered in white polycarbonate. Trees planted behind cast patterned shadows across the surface, similar to those created on Japanese rice-paper screens.

The building's main entrance leads through a vestibule, with a small walled garden visible through a window at the end. Cloakroom facilities are positioned behind curved walls next to the entrance, while the office, tatami room and music room are positioned opposite.