UK architecture firm 5th Studio has added a shingle-clad extension to a house in a listed former inn that is raised above the flood level of the River Cam in Cambridgeshire (+ slideshow).

The use of the shingles references local agricultural buildings, as well as the tonality of the inn's terracotta tiled roof, while their placement across the roof and walls creates a homogenous surface that emphasises the building's unusual shape.

London-and-Cambridge-based 5th Studio became involved in the redevelopment of Wildfowl Cottage after director Tom Holbrook's friend purchased the derelict inn and asked for advice on how to add a room at the rear that would complement the existing structure. 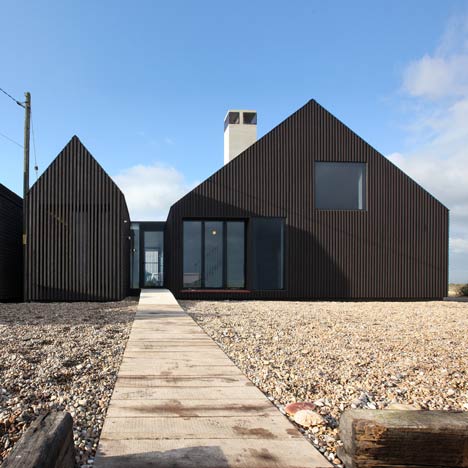 "It developed into a project to establish a point of principle: that good contemporary design was appropriate in the context of the rescue of a listed building," said Holbrook.

The inn building had been severely damaged by regular flooding and the owner had already begun a renovation, involving the replacement of the footings and the entire ground floor.

With the renovation process underway, 5th Studio sought planning permission to extend the inn – originally just a single room deep – to provide a living space raised above the flood plain, so expensive electrical products can be safely accommodated inside.

Local conservation officers suggested building a standard lean-to extension at the rear of the property, but the owner and architects argued that this would negatively affect the appearance of the house and would not meet the functional requirements of the space.

"We set out to model a room that would be formally separate from the elongated original structure, but would complement it, providing a different scale of space and views across the fenland to the back of the house," added Holbrook.

To ensure the new addition is situated above the level of any potential flooding, it was placed on top of a concrete slab, designed to make the structure look like it hovers over the garden.

A board-marked concrete section in the wall facing a drainage channel at the rear of the plot was inserted to create continuity with a proposed garden wall.

As well as windows that wrap around one corner of the extension, a section of the sloping roof is made from structural glazing to offer views of the sky from inside. A funnel-shaped section in the roof contains an additional skylight.

The extension is separated from the main house to preserve the sightline along the original facade and to ensure daylight reaches across the full length of the house.

A minimal glass-walled bridge links the extension with the house, increasing the sense of separation between the two structures.

Having supplied details of the shape and construction methods for the new addition to the owner and his builder, 5th Studio limited its involvement to on-site advice regarding complex elements such as the structural glazing and in-situ concrete.