Prague studio OV-A has added an extra storey and a cast concrete interior to a community centre in the medieval heart of Czech town Slavonice (+ slideshow).

The community centre was originally constructed as a clubhouse for the town's minority German population, prior to the Second World War. 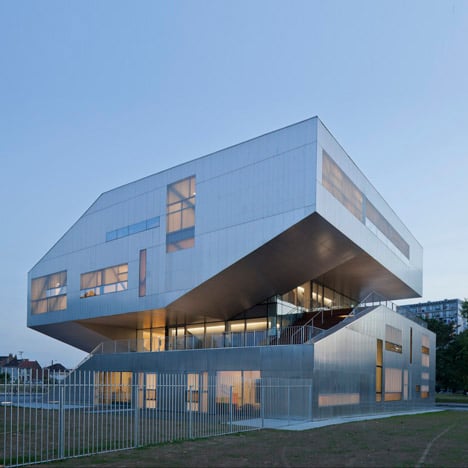 OV-A was keen to retain its original character, as part of the expansion and refurbishment.

A series of crumbling extensions added to the building throughout the 20th century were removed, while the interior – which had fallen into a state of disrepair following years of being unoccupied – was gutted to make room for more modern facilities.

The architects raised the height of the building to increase the interior volume and to match the rooflines of the surrounding properties in the town's historic centre.

"The original house was elevated by one floor to express self confidence of the new architecture and the new city house," said the architects. "The house brings serenity to the site and becomes one of the large volumes on the town's circumference."

Reminders of the structure's previous form can still be seen in the outline of brick-filled windows and a decorative gable occupied by a plaque and the date of the its original construction.

A large concrete core inserted into the centre of the facility now divides it into two sections, with communal spaces on one side and rooms for quieter activities on the other.

"The old walls envelope new life – the old shell was inhabited by a new animal," added the architects.

On the ground floor level, a cafe is located on one side of the core, with a space that can be used as a children's activity area or meeting room on the other side.

A concrete staircase ascends from the centre of the cafe space to a mezzanine level used as a foyer for the double-height auditorium located behind the central core.

The second floor houses a study space with freestanding bookshelves at its centre and an office and meeting room along the external wall.

The concrete core contains a lift and toilets on each level, along with various storage areas and small multipurpose rooms.

Cast concrete surfaces throughout the centre are backed with wooden boards to improve their acoustic absorbency and prevent sound from reverberating throughout the building.

Technical services are positioned at one end of the ground floor and in the attic, beneath the exposed underside of the pitched concrete roof.

Photography is by Tomáš Souček.