Seoul-based Centimeter Studio's injection-moulded chairs slide along the floor on sledge-like bases to nestle into one another without being lifted (+ slideshow).

Centimeter Studio designed the polypropylene Sleeed chairs to slot together horizontally with only a 50-millimetre gap between each piece for maximum space-efficiency. 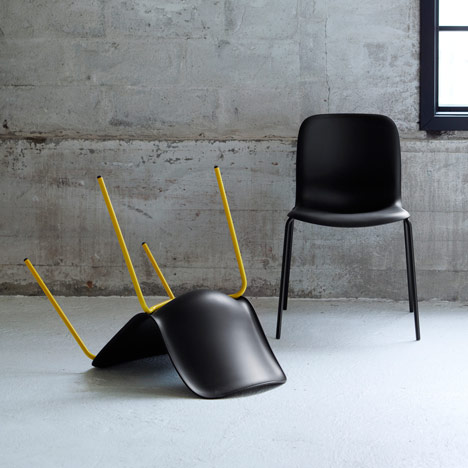 Stacks can be tipped on their end for storage in compact spaces.

Designed for use in public spaces, auditoriums and conference centres, the chairs mimic the design of a sledge.

"The chairs were inspired by the legs of a sledge to make them slide smoothly when being stacked," Centimeter Studio's Youngjun Yakup Yi told Dezeen.

"The way people use stacking chairs has always caught my eye," added Minsoo Vince Choi, Centimeter Studio's chief executive officer and head designer. "I'm interested in not only how a product looks and feels, but how it performs and functions for its user."

The curving backrest slopes down into diagonal front legs, which bend back to form flat rails along the floor.

These rails then curve back up to create the back legs, flattening out into the seat where they connect with the backrest.

The chairs are injection moulded in a single-piece, eliminating a significant amount of waste from the assembly process. Sleeed is currently produced in white, but can be made in any Pantone colour on demand.

Centimeter Studio launched Sleeed at Superstudio Group's Temporary Museum for New Design during Milan design week in April and will be showing the chair again at Maison & Objet in Paris from 5 to 9 September.