These new images by German photographer Robert Herrmann show the near-complete external structures of Zaha Hadid's Wangjing Soho complex, which is scheduled to open later this year in Beijing (+ slideshow). 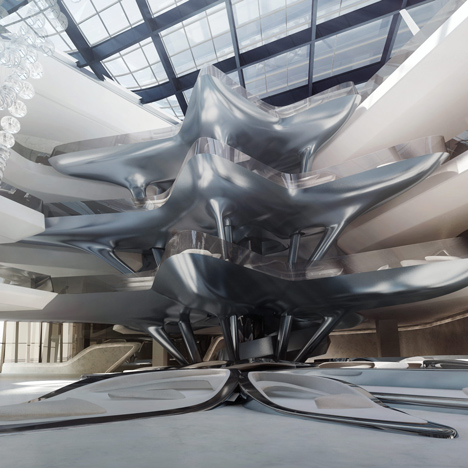 When the design was unveiled in 2011, Zaha Hadid Architects compared it to a trio of Chinese fans that "appear to move around each other in an intricate dance".

"This interplay creates a vibrant architectural complex that is enhanced by an equally dynamic external skin, which continuously varies in density creating a shimmering, exciting presence," said the studio.

The new photographs, taken three weeks ago, show that most buildings in the group appear to be finished, while surrounding landscaping is still in progress.

Once complete, the structures will accommodate 37 floors of offices, three storeys of shops – one of which will be underground – and two basement parking levels. At its apex, the complex will reach a height of 200 metres.

Wangjing Soho made the news in early 2013, when it was revealed that a developer in Chongqing had copied the design and was intending to complete its own project sooner. Recent reports indicate this building is also still yet to complete.

Photography is by Robert Herrmann.