Frustrated with the limitations of 3D-printing technology, Van Herpt created a process that could make large and medium-scale functional 3D-printed ceramics. 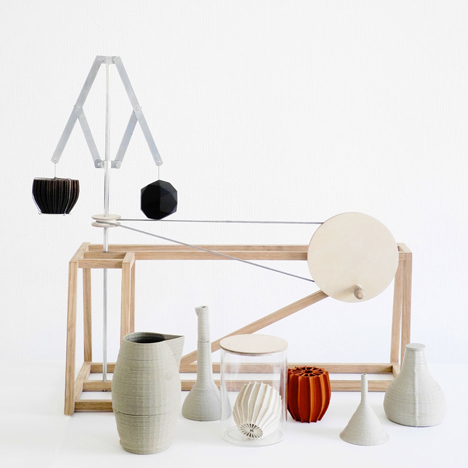 Desktop printers available when he began working on the project were unable to print anything at the size required for functional objects such as plates and bowls, and materials used were not food-safe or particularly heat-resistant.

Industrial printers overcame some of these issues, but presented cost barriers instead. Van Herpt decided to focus on ceramics, and designed and made an extruder that allowed him to experiment with 3D-printing different types of clay.

"Clay is a much more elegant and noble material than plastic," he told Dezeen. "It is much more sculptural."

It took the designer two years of research and development to get the technology to perform how he wanted. "I hit a wall while developing the 3D-printing machine – I was unable to build anything larger than 40 centimetres because the objects would collapse due to the wetness of the clay," Van Herpt said.

"After much iteration I was able to overcome this challenge and build larger things using a new extruder that could process hard clay. This kind of a pure interaction with the material would not have been possible with plastics."

The results of his experimentation include two ranges of functional ceramic objects measuring up to 80 centimetres by 42 centimetres: the 3D Woven Collection and the Sediment Collection.

The former features a weave pattern reminiscent of artisan-made work and the latter includes some of the thinnest 3D-printed ceramics layers available.

"The forms of the two collections are inspired by the design and engineering constraints of the 3D printing process," said the designer. "The rib-like structures are designed specifically so that the vases and other large objects maintain their structural integrity.”

"The form of the vases, the 3D printer and the extruder itself are all down to the practical constraints of the process," he explained. "The physics, materials and 3D printing challenges shape these objects. In guiding and exploring the forms I enjoy playing with geometric shapes that are not perfect geometries, and making things that would be difficult or impossible to make with other processes."

Van Herpt starts each object by selecting the clay type, colour and composition. He then prepares a 3D file on the computer and places hard clay in the piston-based extruder.

This proportions and presses the material through to the delta-type 3D printer, which suspends a print head from three arms.

The clay is pressed through a hose and extruded at the print head. The arms provide height and motion, converting the digital file into a tangible object.

"It is always exciting to see objects materialise right in front of your eyes," said Van Herpt. "I always pay close attention to process results to see if there is anything I can improve or change."

Van Herpt described himself as part of a growing number of designers who are creating production processes from the ground up.

"You worry about waste and C02 in today's cluttered world, which makes you focus on creating the entire process from scratch," he said.

"How can we reduce, reuse and manufacture more efficiently in today's world? How can we create objects that have value without lessening the value stored in the natural world? There is a lot of guilt felt by designers nowadays in making yet another thing destined for landfill."