London Design Festival 2014: geometric pencil sharpeners, a horse-shaped chaise longue and a ladder with a built-in seat are among the dream items created by young designers for clients including Paul Smith, Norman Foster, Zaha Hadid and Richard Rogers (+ slideshow).

Initiated by British design legend Terence Conran, the Wish List project invited 10 emerging designers and studios to use American hardwood to create an object for an established figure in the architecture and design industry – with clients also including John Pawson, Amanda Levete and Conran himself.

The brief for each was a response to the question, 'what have you always wanted in your home but never been able to find?' 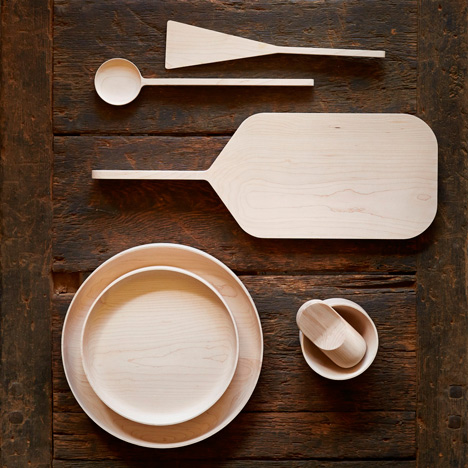 For Conran, this was a private workspace, so he asked designer-maker Sebastian Cox to develop one for him.

"It's going to be a space that Terence can work in without distraction," said Cox, explaining his design for a cocoon-like desk surrounded by storage, built using red oak and cherry.

For Zaha Hadid, the answer to the question was tableware made from wood. This set the brief for Hackney designer Gareth Neal, who experimented with digital fabrication to create a pair of water carafes with extruded edges.

"When asked whether I would like to answer to Zaha's brief to design some tableware, I thought it would be a great opportunity to use the architectural practice's advanced computer modelling software," said Neal.

"The debate between the subtleties of the handmade and digital fabrication is an age-old debate. It is my view that the CNC is just an extension of the craftsman's hands," he said.

The combined brief from architect Richard Rogers and designer son Ab Rogers was for a ladder – an item that Ab says is "often overlooked as ordinary" and "deserves to be elevated by thoughtful design".

The response from designer Xenia Moseley was to create an oak structure with a seating area and small table on top.

"Really the inspiration behind the design was to create somewhere where you can go to switch off, somewhere to relax," said Smith. "In today's world where everyone is so busy, I think this is really important and very needed."

De Leval used thermally modified ash to build the structure, but added a glass facade so Smith can look out at his surroundings while he works.

The smallest items were requested by architect Norman Foster – a collection of pencil sharpeners.

Japanese designer Norie Matsumoto made tulipwood sharpeners in varying sizes, each with a different geometric shape and a compartment for catching the shavings.

London architect Alex de Rijke was paired with design duo Barnby & Day, who created a large round dining table for him, while fellow architect Amanda Levete asked student Win Assakul for a shallow fruit or cheese bowl to sit over her existing dinner table.

"We often have dinners at home for 18 people. Our table is 4.8 metres long and I have always wanted a long, shallow bowl to run almost the length of the table," said Levete.

"But for smaller dinners of say six to twelve people, I don't want such a long bowl. By making it extendable we resolve this."

The brief from architect Alison Brooks to young designer Felix de Pass was also centred around dining. "I have never been able to find a really great kitchen stool that is the right height for a kitchen counter and that is quiet, clever and beautiful," she said.

De Pass used cherry wood to build the stool, which features a circular seat and a slender metal footrest.

The loosest brief was given to Gwendolyn and Guillane Kershbaumer of London-based Studio Areti from designer John Pawson, who didn't have a particular item in mind.

"John was particularly interested in built-in items for a room such as light switches, plugs, doorknobs, doors and door frames," said the pair. This led to the creation of a triangular shelf, a slanted door and a hook.

The final object was created for artist Allen Jones – a chaise longue based on the form of a horse. "Allen's idea stemmed from a story about Peggy Guggenheim and her mischievous nature," said RCA graduate Lola Lely, who designed the piece.

"She commissioned a sculpture of a horse for her museum in Venice. The horse has a large organ which screws on and off. She often screwed it on when the nuns came by," she explained.

All ten objects were crafted during a week-long stay at the Berkshire workshops of Benchmark – the sustainable furniture company co-founded by Conran – and the environmental impact of each one was tracked during the manufacturing process.

They will go on show at the V&A museum next month as part of the London Design Festival 2014.

Photography is by Petr Krejci.