Swedish architect Tommy Carlsson has completed an affordable prefabricated home near Stockholm that is clad in corrugated iron and resembles a cube with some of its corners cut off (+ slideshow).

Tommy Carlsson developed the Happy Cheap home as a prototype for a low-cost and space-efficient update of the prefabricated homes that are common throughout Sweden's suburbs.

"The concept is both a vision of a better world in the small format, how we live in the future, what we need around us in the housing world and how large a house we really need," the architect explained. 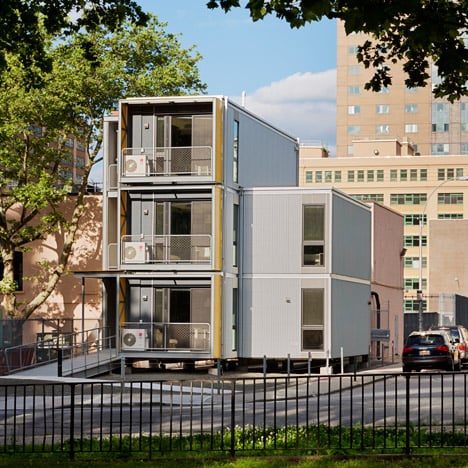 The design of the 110-square-metre property aims to optimise internal space, with a series of angled surfaces defining the interconnected ground-floor living areas and dividing the upper storey into two bedrooms and a lounge.

The house was built on the 65-square-metre site using a prefabricated modular frame of laminated plywood that can be assembled quickly on site, reducing the total cost of the project to just 170,000 euros.

This modular construction method allows the shape of the building and the facade to be adapted to meet the client's requirements. In this case, the entire structure is clad in galvanised corrugated iron.

"The facade and the cut outer geometry of the cube is treated with the same material everywhere to emphasise the volume as a whole," said Carlsson.

The house is located on a sloping site with a series of shallow concrete steps leading to an entrance sheltered beneath a corner spliced from the metal shell that creates a connection between the interior of the building and the site.

An irregular roofline gives the building a sculptural appearance that changes when viewed from different angles and reflects the unusual arrangement of the interior.

Stained plywood was used to clad the internal surfaces of the porch area and to create a link with the interior, which is entirely constructed from plywood panels.

A stairwell adjacent to the entrance projects through the centre of the property, connecting the two levels and lending a sense of height to this space.

The passage next to the stairs continues toward the kitchen and dining area, where a door leads out to the garden at the rear.

The stairs ascend to an open lounge area with a sloping ceiling and low picture windows incorporated into two walls that look out towards the surrounding forest.

A large door in the plywood wall next to the staircase can be shut to separate the lounge space from two irregularly shaped bedrooms.

Photography is by Michael Perlmutter.