Swiss artist Zimoun has used motors to add jostling and spinning motions to three installations made up of cardboard boxes (+ movies).

Zimoun collaborated with architect Hannes Zweifel to install 81 boxes between two levels of a room at the Mannheimer Kunstverein gallery. 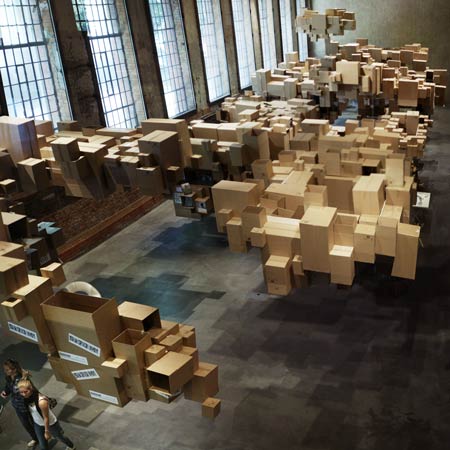 Twenty DC-motors are positioned around the handrail of the first floor to surround the boxes, which each measure 70 cubic centimetres and are hung from thin nylon ropes in an 80-centimetre square grid.

When activated, the motors pull more threads connected to the boxes around the outside with varying intensity and in different directions.

The proximity to their neighbours causes the cardboard cubes to bump and jostle each other, until all 81 are in motion.

"The collision of the boxes and the friction caused when they collide gives rise to a multitude of sounds and noises," said Zimoun. "The acoustic perspective changes as the viewer moves along the exhibition space and can be experienced in constantly new ways."

The installation, which will remain in place until 21 September, is one of three new kinetic pieces by the artist that combine motors and cardboard.

As part of a private collection, Zimoun attached 157 rectangular boxes to the walls, ceiling and floor of a white room to form the second installation.

All with open fronts, the boxes face in the same direction and contain cotton balls on the end of thin metal wires, connected to motors at the bases. The motors move the wires so the balls rattle around the top of the box.

The final piece, mounted on a wall at Zimoun's studio in Bern, works in a similar way. It is made up of 296 small cardboard cubes arranged in a tightly packed grid, each with purple felt balls inside.

The balls spin around in circles at different speeds and knock against the sides. Some rotate clockwise and some anti-clockwise, creating a pattern of moving spots.