Lee Broom called his collection Nouveau Rebel to reference the changing views of marble as a material for contemporary design.

"It's a reference to how marble was always considered a luxury material, sort of nouveau riche, but the idea was to create new pieces and call it Nouveau Rebel," Broom told Dezeen. 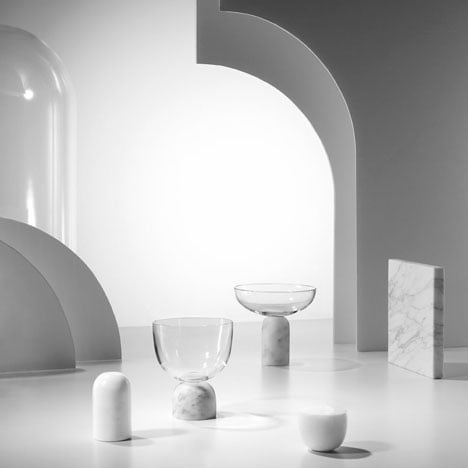 "There is a slight 1980s nod to them as well because I like the idea that something could be considered naff and then comes back into fashion."

All the items in the collection are made from Carrera marble, which is lathed into geometric shapes that are thin enough in places to allow light to shine through.

As a development of his On the Rock vessels that pair marble bases with glass cups, Broom has created a Martini glass with a spherical bottom and conical top.

"When you start to work with one material, you get to know the factory and its limitations," said Broom. "I started thinking of other ideas."

The Globe Light measures 40 centimetres in diameter, and has a base carved from a single piece of marble and a crystal glass domed top.

A very thin flat piece of marble covers the light source within the base, which shines through the material.

Broom's Chamber Lights are pendants with marble diffusers encased in crystal shells, which come in various shapes and sizes.

The Tube Light is made from a cylindrical piece that is just six-millimetres thick along its length, with LED bulbs inside and bronze caps on each end.

"It's a marble take on a fluorescent light," said Broom. "It's probably the difficult piece in the collection to make because its using one long piece of marble."

A marble candlestick comprising two cylinders stacked with a sphere in between completes the collection.

"Recently there's been a lot written about marble, it's very de rigueur," Broom said. "I like the material because it's similar to working with wood. Everything has the same shape and form but every piece is different."

The collection will launch as part of a specially designed installation at Broom's Shoreditch showroom during this year's London Design Festival, which takes place next week from 13 to 21 September.