Brutalism: one of the 20th century's most controversial architecture movements is back in vogue with design fans as nostalgia mixes with a new-found respect for its socialist principals. In our new series, Dezeen will be revisiting some of the key projects from the Brutalist period, but first here's a short introduction from the Royal Academy's Owen Hopkins.

Bold, brash and confrontational, there can hardly be a more controversial – or misunderstood – architectural movement than Brutalism. Its very name is misleading, causing many to condemn its concrete creations for their apparent "brutality". Brutalism's etymology actually lies in the French béton-brut – literally "raw concrete" – the movement's signature material. But Brutalism was concerned with far more than materials, emerging in the early 1950s through dissatisfaction with existing forms of Modernism, from which it aimed to make a conscious departure while at the same time recapturing its original heroic spirit.

Today, we use the term Brutalism to refer to both a particular moment in post-war British architecture – given the epithet New Brutalism by the critic Reyner Banham – and the broader phenomenon during the 1960s and 1970s of an almost sculptural Modernism rendered in raw concrete, which had manifestations the world over.

For a movement that is synonymous with concrete, it is some surprise that the building that is often seen as inaugurating the New Brutalism was mainly made of steel, glass and brick. This was Alison and Peter Smithson's Hunstanton School in Norfolk (1947–54), where the architects transposed the vocabulary of Mies van der Rohe's Illinois Institute of Technology into an asymmetrical plan with materials left in their raw, unfinished states. This use of materials "as found" was in deliberate contrast to the elegant curving roof, neat tiling and timber detailing of Leslie Martin and Robert Matthew's Scandinavian-influenced Royal Festival Hall – the type of Modernism the Smithsons had in their sights. For Banham, who became something of a cheerleader for the New Brutalism, Hunstanton was "almost unique among modern buildings in being made of what it appears to be made of". So stark was the result, he was moved to suggest that the New Brutalism constituted an ethical, as much as an aesthetic, proposition.

In some ways the Miesian derivations at Hunstanton were something of a false start for the emerging Brutalism. The movement's most important single influence was undoubtedly Le Corbusier's Unité d'Habitation in Marseille, both in terms of aesthetics and social programme. Completed in 1952, the Unité comprised 12 storeys of generously proportioned apartments accessed from interior "streets", raised up on pilotis and topped by a roof terrace – all built from roughly cast béton-brut. Although the Unité still reflected the utopian aspirations of pre-war Modernism then under attack, Brutalists like the Smithsons saw its form and aesthetic as reflective of the spirit of the present moment and providing a way forward for a broader regeneration of Modern architecture. 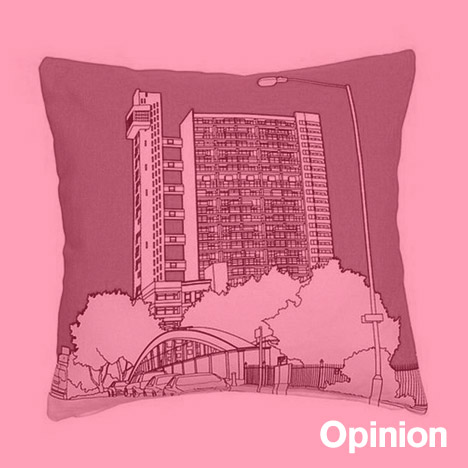 Many ideas from the Unité appeared in the Smithsons' unbuilt 1952 design for the Golden Lane Estate in London. The interior "streets" of the Unité became exterior "street-decks" at every third level – forerunners to the infamous "streets-in-the-sky" that would become ubiquitous in social housing projects in the 1960s and 1970s. These made the building's circulation legible, while aiming to facilitate the type of social interactions one might have on an actual street. The blocks were arranged to work with the surrounding street layout, rather than standing in isolation as per the Corbusian model. Though of different building types, the Smithsons' Golden Lane Estate design developed many of the ideas they had explored at Hunstanton, "emphasising visible circulation, [and] identifiable units of habitation," according to Banham.

Rather than presenting their designs through plans, sections and elevations in the conventional way, the Smithsons created collages, with cut-outs of people pasted onto their drawings, so, in Banham's words, "the human presence almost overwhelmed the architecture". While, a generation before, Le Corbusier had famously taken inspiration from ocean liners and motors cars, the Smithsons looked towards everyday life – advertisements, bric-a-brac, what they called "the stuff of the urban scene". These concerns were shared by a number of artists, especially those associated with the Independent Group centred on London's ICA, with the parallels coming to public attention in a seminal exhibition, This is Tomorrow, held at the Whitechapel Art Gallery in 1956.

As the austerity of the 1950s gave way to the energy and renewed national self-confidence of the 1960s, Brutalism took centre stage, defining British architecture of that decade. Brutalist social housing began appearing all over Britain, with notable examples, such as Park Hill in Sheffield (1957–61) by Jack Lynn and Ivor Smith and Southampton's Wyndham Court (completed 1966) by Lyons Israel Ellis, ensuring raw concrete and "streets-in-the-sky" became familiar sights.

Brutalism was by no means confined to social housing. The Smithsons' Economist Building in London's St James's (1962–64) showed how Brutalist ideas could be deployed in sensitive settings. Its cluster of three towers of different heights with an elegant plaza at ground level allowed the creation of a deliberately complex relationship to its historic site. Outside London, the Preston Bus Station (1968–69) by Keith Ingham and Charles Wilson of Building Design Partnership saw Brutalism used to give municipal civic identity to major pieces of infrastructure. This was an idea also explored by Owen Luder and Rodney Gordon, whose Trinity Square car park in Gateshead (1962–67), made famous by the 1971 film Get Carter, and Tricorn Centre in Portsmouth (1962–67) were both local landmarks – for better or for worse – before their respective demolitions in 2010 and 2004.

Although the theoretical roots of the New Brutalism were decidedly British, even English, rough sculptural buildings of raw concrete rose all over the world during the 1960s and 1970s. From Paul Rudolph's Yale Art and Architecture Building (completed in 1963), to Paulo Mendes de Rocha's Brazilian Museum of Sculpture in São Paulo (completed 1988) and Kenzo Tange's Kuwait Embassy in Tokyo (completed 1970), raw concrete became a global language. Though emerging from different contexts and theoretical viewpoints, these various manifestations of Brutalism shared an ambition to reinvent modernism, to create an architecture that was hard-edged – literally and conceptually – that was radical and often confrontational.

In the late 1960s, the Smithsons finally got their chance to put their social housing ideas into practice with Robin Hood Gardens in London's Poplar, close to Ernő Goldfinger's Brutalist residential building Balfron Tower (1965–67). Their scheme comprised two, relatively low-rise blocks arranged around a garden area, which was landscaped with raised mounds, so that greenery was visible from the windows of even higher floors. The two blocks contained both flats and maisonettes, the idea being to encourage a greater social mix than possible with just one type of dwelling. With cars banished, residences were accessed via 'streets-in-the-sky', intended as ever to facilitate the interactions and social ties between neighbours through which a community might emerge.

Robin Hood Gardens in many ways constituted the ultimate realisation of the progressive social ideals that informed much of Brutalist thinking, but by the time it was completed in 1972, the Brutalist moment had passed and it was an almost immediate failure. The rough idealism of the 1950s no longer reflected the consumerist realities of the 1970s. The poverty the estate was meant to alleviate was instead compounded by a high crime rate and frequent vandalism of communal areas, which were rarely properly maintained. Rather than presenting an idealistic view of the future, Robin Hood Gardens came to represent all that was wrong with the intertwining of architecture and housing policy, and the top-down way those policies were usually implemented.

Some hailed it as a masterpiece. However, for many others Robin Hood Gardens was just another "concrete monstrosity" that "brutalised" its inhabitants, and no different from the usually cheap and uninspiring slab blocks erected all over Britain during the post-war years. Despite this frequent lumping together of post-war Modernism, Brutalist buildings always seem to attract particularly harsh criticism. The architecture which so epitomised the golden era of the 1960s became widely reviled and frequent victim to the wrecking ball. For those on the left of the political spectrum, the destruction of Britain's Brutalist legacy is nothing more than an attempt to erase that brief moment of socialist housing policy from collective memory. But this largely belies the fact many that many housing estates erected in utopian fervour failed on their own terms, revealing the inherent shortcomings of intertwining architecture and social policy – and, often, of the buildings themselves.

Nevertheless, in recent years Brutalism has undergone something of a rehabilitation, becoming fashionable in certain architectural circles. It is a remarkable reversal (albeit with a long way to go), especially when one realises the most pernicious aspect of Brutalism's legacy – the wedge its bloody-minded and often rather arrogant polemics drove between architects and the public – is still affecting architecture today. At their best, though, Brutalist buildings have a sublime and haunting power like few others – and should be preserved for posterity. Walking south along Waterloo Bridge at dusk with the powerful concrete masses of the Hayward Gallery and Queen Elizabeth Hall rearing up in front of you and The Kinks' song Waterloo Sunset, released in 1967, the same year those buildings were completed, ringing in one's ears, it is hard not to be struck by the poignancy of the lyric: "As long as I gaze on Waterloo Sunset, I am in paradise".

Owen Hopkins is manager of the Architecture Programme at the Royal Academy of Arts in London, and the author of Reading Architecture: A Visual Lexicon (2012) and Architectural Styles: A Visual Guide (2014).