The shell of the Leadenhall Building by Rogers Stirk Harbour + Partners – also known as the Cheesegrater – is now complete and has been handed over to its future tenants for fit out (+ slideshow).

With a height of 224 metres, the office block is the tallest building in the City of London. It is best known for its tapered profile that pulls back to respect views of St Paul's Cathedral, and which also earned it its nickname.

The Leadenhall was designed by Richard Rogers' firm for a site beside the architect's celebrated Lloyds Building and, like that structure, the tower expresses its entire framework on the exterior.

Speaking to Dezeen last year, Rogers described the "exciting" dialogue set up by the two buildings and St Paul's. 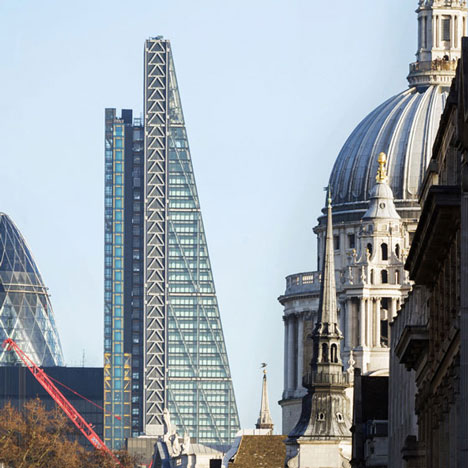 "To me that's what architecture is all about. It's not about fitting in, it's setting up these dialogues."

"The enjoyment of St Paul's was that it was seen against a very low and rather poor medieval background. That was a flourish. It's exactly the same with any form of architecture. It's a dialogue, it's a beauty that comes from contrast," he said.

The building's visible framework is made up of a series of constituent parts.

Instead of a structural core, a full-perimeter structure, known as a braced tube, defines the edges of each office floorplate to give the facade its most visible element. These elements break the building down into seven-storey modules.

Other distinguishable features include the ladder frames that enclose the fire-fighting cores and a circulation tower that runs up the northern side of the building.

The triple-glazed facades make use of 70,000 square metres of glass. Blinds were installed in the cavity between the two inner layers of glazing, and these adjust automatically to protect the interiors from glare and overheating.

Every floor inside the building is rectangular, getting gradually smaller towards the top. This allows for flexible internal layouts.

Although not yet complete, the base of the tower will feature a seven-storey-high public space filled with shops and restaurants. Set to open next year, it will feature a pocket park on one side, a public exhibition area and a thoroughfare running north to south.

Members of the public will be able to go inside the building on the 20th and 21st of September as part of Open House London, the annual open buildings event.

Photography is by Richard Bryant, apart from where otherwise indicated.