Allies and Morrison Architects pays tribute to the Brutalist architecture of London's South Bank with this new home for the Rambert Dance Company, which conceals double-height studios behind a precast concrete facade (+ slideshow).

Located close to Denys Lasdun's National Theatre and the Hayward Gallery, the purpose-built seven-storey structure was designed by London firm Allies and Morrison to provide a new headquarters for contemporary dance company Rambert. 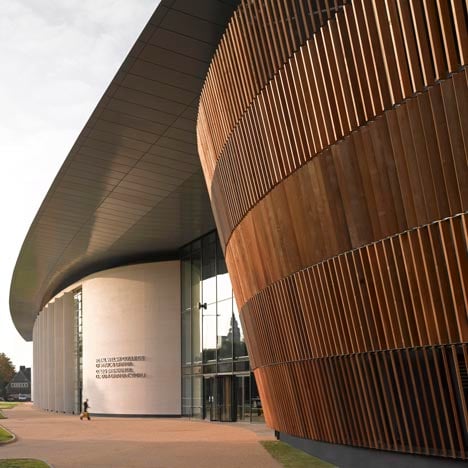 Royal Welsh College of Music and Drama by BFLS

The building will eventually be sandwiched between a series of buildings as part of a new terrace along Doon Street. As such, only the narrow front and rear of the building will be visible from the street – both of which are clad with precast concrete panels.

"We wanted to ensure that the precast cladding had the appearance of concrete, making a clear visual connection with the rest of the South Bank buildings such as the National Theatre or Hayward," Allies and Morrison director Nick Péri told Dezeen.

The architects left the reinforced concrete frame of the building exposed on interior stairwells, walls and columns to contrast with the painted plasterboard, joinery and resin floors of the studios.

A large proportion of the ground floor is given over to a loading bay to the rear of the building that allows access for the company's touring lorry, and a central courtyard that provides natural light and ventilation.

The architects see this space as "a social focus for the life of the building".

Two sets of stairs provide access to the upper-floor studios, offices and changing rooms, while a further flight of steps leads from the glass-fronted welcome hall to a basement archive and public reading room.

The two dance studios, which occupy a double-height level above the welcome hall, are expressed on the exterior of the building in the form of two lightweight boxes that project from the precast concrete facade. Both are clad in strips of bronze-anodised aluminium.

"The narrow, horizontal, linear panels have subtle differing surface treatments, creating a sense of texture and movement to the facade," Péri told Dezeen.

The company changing rooms and offices occupy single-storey pockets that overlook the studios below.

"The sectional arrangement exploits the mix of single and double-height spaces, allowing permeability and views between them," added Péri.