Supported by home-rental website Airbnb, the installation is titled A Place Called Home and is one of the London Design Festival's landmark projects. 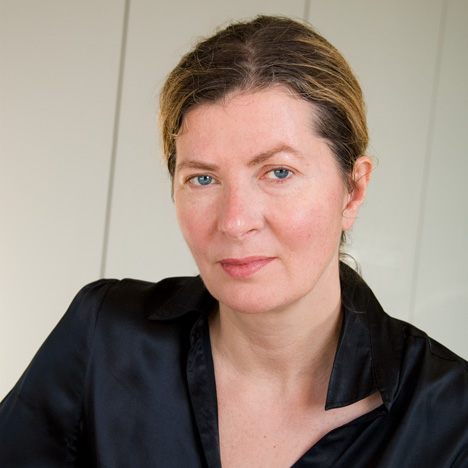 Morrison's "home" is designed for a pigeon keeper, "because who else would choose to live in the middle of Trafalgar Square?" he said.

Inside, Morrison's furniture designs are displayed against simple plywood surfaces. A small bed and a desk are positioned at the far end, while a seating area in front of large windows looks out onto the square.

The blue pavilion by Studioilse asks the question "Home?" with a neon sign on its roof. Ilse Crawford wanted to examine the personal aspects of home, and a live Twitter feed displays responses from the public to "What does home mean to you?", which is written on the floor.

"That's really what we wanted to interrogate," Crawford told Dezeen. "Home is in your head. It's rituals, it's things that make you feel comfortable and safe."

Videos showing everyday rituals including making tea and reading the newspaper are projected onto two walls inside, accompanied by common sounds like clattering pans and furniture being moved.

"It's a fluid thing, home, it's a response to the people that live there," said Crawford. "It wouldn't have made sense to represent it as a physical thing. Film seemed to be the only way to express that."

A scent developed by the studio and fragrance expert Azzi Glasser wafts around the space, because "every home has it's own distinctive smell", according to Crawford.

Raw Edges' design crams all the rooms typically found in a home into the small space using folding furniture and sliding partitions.

"This project is about the fact that if you're in one place at one given time, you can't be in another," Raw Edges cofounder Yael Mer told Dezeen. "When you're in the shower, you obviously can't be in the bedroom or the living room."

Three internal walls can be moved along rails to expand or shrink the bedroom, living room, kitchen and bathroom.

"This is a house for one person, so when you're not in one space the other spaces shrink," Mer explained."You can have a very big shower, a very big living room and a very big bedroom."

Pieces of furniture attached to the partitions slot together when closed up against each other. The bed concertinas up and shelves fit over one another, while some elements like the sink are used by two rooms. "Everything is quite minimalistic," said Mer.

The front wall is missing so visitors can access and move between each of the spaces.

Finally, Patternity has installed a giant kaleidoscope into the side of their pavilion, which can be viewed from the inside and out.

Visitors turn a wheel to activate the optical effects created by refracted light. While spinning, a camera inside takes a digital photograph that is automatically uploaded to an online gallery.

The Patternity designers interpreted the theme of "home" as encompassing the world we live in, which is made up of simple shapes.

"We thought about home on a macro scale, so home being Earth which we all share," Patternity cofounder Anna Murray told Dezeen.

They covered the exterior of the wooden structure in black geometric patterns, which pair with the shapes created in the kaleidoscope.

"It's a celebration of the fundamental building blocks – the circle, lines, triangles, squares – that make up life," said Murray.

A Place Called Home was commissioned for the London Design Festival 2014, which runs until 21 September. Photography is by Ed Reeve.