News: building work has begun in Beijing on the National Art Museum of China by French architect Jean Nouvel, who beat Frank Gehry and Zaha Hadid in a competition for the project in 2013.

The design for the National Museum of China (NAMOC) by Jean Nouvel features an intricately patterned perforated facade, which wraps around part of the building. 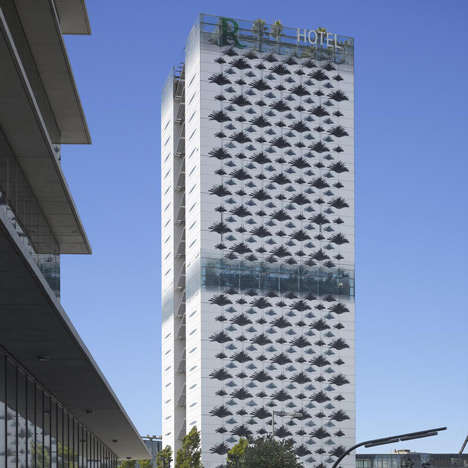 This facade filters natural sunlight, providing environmental protection for an indoor garden that occupies a six-storey atrium on the north side of the building.

At ground level, the facade and entrances have been recessed to create the impression of a large mass lifted above the ground.

"The NAMOC is written in space as a fragment of an ideogram shaped by an artist over a long period of time, giving it both a sense of mastery and voluntary incompleteness: by taking off the ground it imposes itself into the sky," said Nouvel.

"It thus resists the laws of gravity while asserting its presence."

At the centre of the building, a funnel-shaped atrium has been punched through the entire height of the building to the roof where it protrudes out with a dome-shaped covering. The roof also features covered walkways to protect visitors from the sun.

Inside, galleries and an auditorium are arranged as a series of irregular voids and clusters, with a strip of single storey spaces on the top level.

At ground floor, the central space – called the Summer Hall – will be overhung with a gold ceiling influenced by the roofs of the city that can be viewed in the distance from the upper levels of the building.

"This carved, gold-painted ceiling offers a sequential theoretical view of the history of Chinese art and culture from the fifteenth century up to the current day, as well as of the centuries to come," said Nouvel.

"Images of major or emblematic works belonging to different periods and influences form a panorama of Chinese painting and culture. The contents will be decided in consultation with the most eminent Chinese and international specialists."

An entrance on the east side of the building opens onto a landscaped area. Two basement levels provide additional exhibition and events spaces as well as storage areas.

When complete, the building will be the showpiece for a new cultural district being built in Beijing's Olympic Park, near the Herzog & de Meuron-designed Birds Nest stadium. It will be dedicated to displaying 20th century art and calligraphy from China and around the world and is expected to attract 12 million visitors per year, making it the world's busiest art museum.

The competition to design NAMOC was conducted over three rounds, from December 2010 to July 2012. In July 2013, Frank Gehry unveiled his shortlisted design, which would have featured a facade of translucent, stone-like glass panels. Gehry's team created full-scale mockups of the panels in Beijing as part of the development process.

Later that month, Nouvel's team confirmed the architect had won the commission with a design created in collaboration with Beijing Institute of Architecture Design.