The exhibition, which opens to the public at the Barbican Centre in the City of London tomorrow, includes work from 18 photographers including Iwaan Baan, Helene Binet, Bas Princen, Ed Ruscha and Julius Schulman. 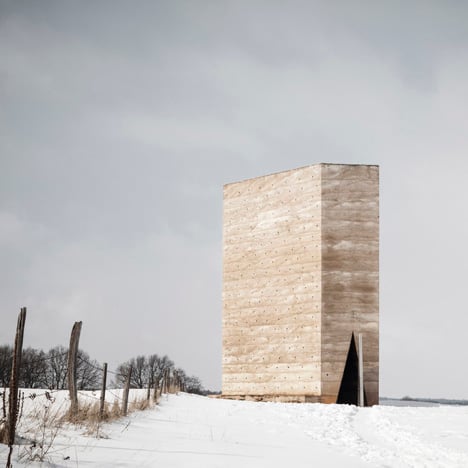 It aims to bring together a range of work to show how, through documenting the built environment, architectural photography can reveal "wider truths about society".

Over 250 photographic works are featured in the show, including a number of rare images, covering the period from the 1930s to the present day.

"Photography and architecture have a long and shared history and yet amazingly this if the first major exhibition in London to throw light on this relationship," said Jane Alison, head of visual arts at the Barbican.

"Featuring leading photographers who between them have represented some of the most important architecture of the 20th century, it is a must see for anyone interested in how we understand architecture and equally in the dramatic global shifts in society in the post-war period."

Each photographer's work is presented chronologically, starting with Changing New York, a series shot by Berenice Abbott between 1935 and 1939 that chronicles the emergence of the skyscraper as the city's defining typology.

These images will sit alongside documentary photographs of architecture in the southern states of America, shot during the same period by Walker Evans.

One of architectural photography's most significant figures, Julius Schulman, is represented with images from the project that spawned his best known images – photographs of the Case Study Houses programme in California shot between 1945 and 1966.

Lucien Herve's series on Le Corbusier's Chandigarh city project in India rounds off the first half of the 20th century, before the exhibition moves into the 1960s and 1970s with images from Ed Ruscha, Bernd and Hila Becher, Stephen Shore and Thomas Struth – all of whom focused on depicting vernacular architecture during this period.

The final part of the exhibition looks at images that show cities going through phases of dramatic change. These include Bas Princen's documentary series Refuge, Five Cities focusing on urban transformation in the Middle East and Iwaan Baan's photographs of the infamous Torre Davide – a 45 storey skyscraper in in Caracas, Venezeula, that squatters turned into a role model for informal communities.

Other works in this section include Guy Tillim's Avenue Patrice Lumumba – focusing on colonial structures in Angola, Congo and Mozambique – Simon Norfolk's Chronotopia and Burke + Norfolk series that depict the effects of the past on modern architectural landscapes and images of colossal modern construction projects by Nadav Kander.

A series of events will run parallel to the exhibition, which is open until 11 January 2015, including a new art commission for the Barbican's Curve gallery by artist Walead Beshty and a film season.