The slope of an auditorium juts out from the side of this library by Spanish architect Óscar Pedrós to provide a covered space beneath for open-air performances (+ slideshow).

Architect Óscar Pedrós was commissioned by the town of Carballo, Galicia, to design a library that would become a community attraction, as the former library had fallen out of public use and become an archive centre. 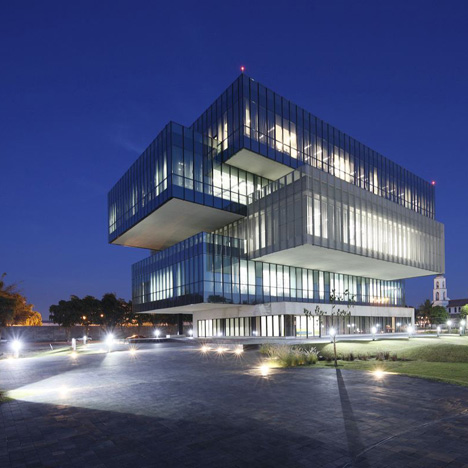 "I encouraged them not to build a typical library for studying, but a flexible media space where people of different ages – from babies up to elderly visitors – could share life," Pedrós told Dezeen.

The library has been built up to the edges of an irregular-shaped plot in order to maximise space, and features a cantilevered auditorium on a southwest corner, which also provides cover and enhances the acoustics for an outdoor auditorium beneath it.

"The inside auditorium provides space for a reading club, like the film Dead Poets Society, while the outdoor one will be used for spring and summer activities, such as children's after-school performances," said Pedrós.

Narrow windows also peek out from the sides of the building, but otherwise it shuns its surroundings, which include car parks and apartment blocks, to focus on a central courtyard.

As well as bringing light into the centre of the building, the internal courtyard also provides a buffer zone for the open-plan spaces around it, so that infants, students and older community members can be in the library together, but enjoy a degree of separation.

Spaces upstairs are arranged in a circle overlooking the ground floor and central courtyard, and are designed to encourage interaction between generations, with overlapping sections for fiction, comics, music and media. A cantilevered lounge area also provides a reading spot for children, lit naturally by a skylight above.

Two staircases have been added between the floors to encourage visitors to explore the space.

"The main idea was to create a dynamic building that users could circulate around, and also provide plenty of spaces where users can stay and read, or listen or watch videos – keeping some privacy, but also belonging to the whole," said Pedrós.

It was also essential for the architect that the new space was flexible enough to support a range of multimedia functions, in order to safeguard its future.

"Thinking about a 21st-century library – as a friend of mine would say – is like wondering about a book's cemetery," he said. "The only solution was to share material space with virtual space, to avoid Carballo's newest building ending as a book warehouse."

The exterior rainscreen cladding is made with three-by-one-metre ceramic tiles that are six millimetres thick.

"By using this slender material, we didn't have to decrease the inside perimeter too much," said Pedrós. "The tiles also help to get lots of reflected light inside through the courtyard, and their big size allows the mediatheque to keep its scale as an institutional building."

Photographs are by Héctor Santos-Díez, unless otherwise stated.