News: Herzog & de Meuron and John Pawson have teamed up to design the exterior and interior of a luxury Manhattan hotel and apartment block for New York developer Ian Schrager.

Ian Schrager Company has revealed that both Swiss firm Herzog & de Meuron and London designer John Pawson are involved in the design of 215 Chrystie, a new 28-storey block in downtown Manhattan.

The architecture is conceived by Jacques Herzog and Pierre de Meuron, who previously worked with Schrager on residential project 40 Bond. They propose a structure with a raw concrete frame pushed to the facade, allowing for a column-free interior. 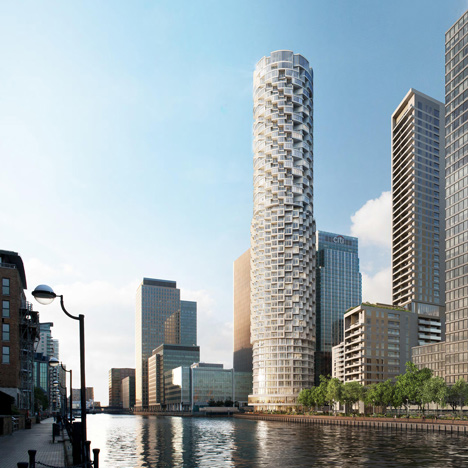 A 370-room hotel will be housed within the building's lower levels, while 11 penthouse apartments with bespoke interiors designed by Pawson will occupy the uppermost floors.

"Our idea was to stack two very distinct typologies on top of each other, and on one hand to express their difference, while on the other to unify them within the same building skeleton," said Herzog.

The exposed structural skeleton will frame floor-to-ceiling glazing, offering uninterrupted views of the New York City skyline. The architect said his aim was to create a building that "becomes like a city within the city".

"To introduce a sense of scale and to further foster the expression of each individual floor, each column is slightly inclined," he explained. "The prominent corner of the building facing Chrystie Street is where the two geometries of the inclined columns meet."

"Rather than giving one direction priority, the two directions are braided together. The result is a sculptural corner column that becomes the visual anchor for the entire building," he added.

John Pawson has designed interiors for the 11 penthouses, most of which will take up an entire storey. According to the designer, floor plans will maximise the sense of light and space.

"The interiors of the 215 Chrystie residences are charged with atmosphere, where the fundamental qualities of light, surface and proportions are such that the experience of space itself is transformed," he said. "The goal was to express the details of life in the details of the architecture."

Features will include walnut wall panelling, oak floors, stone and concrete bathrooms, and flush detailing. Lighting will be added by designer Arnold Chan.

215 Chrystie is set to open in 2016 and is understood to be one of two buildings Herzog & de Meuron is working on for Schrager, alongside an apartment block at 357 West Street.

"215 Chrystie is the ultimate expression of Uptown meets Downtown. It is both tough and refined at the same time," said Schrager. "I'd like to think of it as 'refined gritty' or 'tough luxe'."

The building will also include a private garden, separated from the street by a dense green wall.