OODA was asked to oversee the transformation of two partially occupied but neglected buildings in central Porto into 18 studios for tourists and students, as well as reviving the retail units on the ground floor. 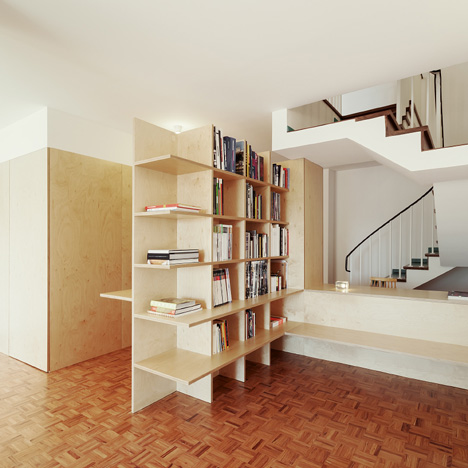 The modular furniture proposed by the architects for the interior of the LOIOS development is intended as a strategic solution to the larger issue of disused properties in the city, which could be repurposed quickly and affordably by inserting similar prefabricated units.

"In downtown Porto there are a huge number of buildings with the same dimensions and framework," architect Diogo Brito told Dezeen, "so it is somehow useful that for the same condition we could find a response that addresses the changing needs of clients and buyers' preferences, but also achieves some construction rationalisation and cost efficiency."

The modules can be fabricated to incorporate different functional elements, and can be mounted individually or in groups depending on the space available and the number of services required.

"The units are made of a light steel structure as the inner skeleton, cement fiber board panels and fiber glass planels on the interior, and on the module´s perforated envelope Valcromat – a material which combines the natural features of wood with the brightness of colour," explained Brito.

The LOIOS building contains 16 studio apartments spread across five storeys above the ground floor retail units. A single module in each houses all of the necessary facilities including a bed, office, bathroom, kitchenette and storage space.

In addition, a pair of double-height duplex units accommodate two of the modules, stacked one above the other, with the higher box resting on a structural beam that crosses the space.

The standard modules incorporate a bed that slides out from the base, with a desk on a raised platform accessed by swinging out a set of steps also built into the base.

A kitchenette on one side is revealed by pulling aside two cupboard-like doors, while a bathroom containing a shower, toilet and washbasin is hidden behind a door set into the other side.

The exterior of the boxes is covered with a perforated pattern based on painted tiles found in some of the city's historic buildings.

"As the apartments will be targeted to tourists and seasonal foreign students, the client urged us to create something inside that could evoke some historic symbol of the city in an unique way," Brito explained.

Images of the pattern were rasterised and applied to the surfaces as a series of recessed dots and holes, which enable parts of the pattern to glow when illuminated from within.

"The perforated technique allowed us to imprint the rasterised images but also to give some transparency to the module so it functions as a grand chandelier in the night," Brito added.

As part of the renovation, original stone details on the exterior of the two buildings were cleaned, the rear facades were re-painted and existing tiles on the frontages were replaced.

Traditional methods and materials were employed throughout the renovation, including vegetable-based paints used on the rear facade and varnishes with mineral pigments applied to interior details, including doors, stairs and handrails.

OODA was also responsible for the renovation of another 19th-century building in the city into apartments, with interiors featuring chipboard surfaces and folded metal staircases. In another project, the studio installed a net for sitting on above a staircase in a Porto apartment.