Remix is in the process of overhauling the interior of an old building in the Dashilar hutong, where a lot of regeneration work is being undertaken. 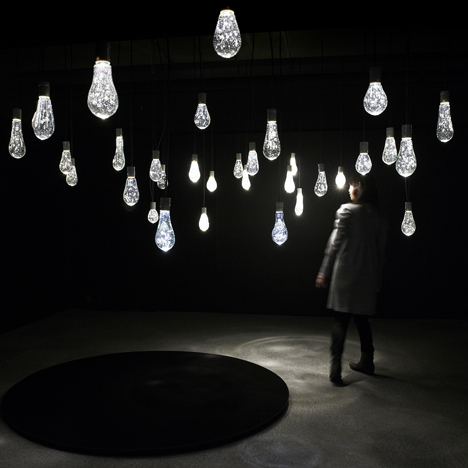 However, the architects knew early on the project would not be completed to show visitors to the area during the city's annual design week, so came up with an alternative presentation.

"We came up with a way to visualise our plans instead," reMIX cofounder Federico Ruberto told Dezeen.

Having already stripped out the existing floors and partitions from the buildings, reMIX decided to use the dark open space to host a wireframe installation that alluded to their proposal but could also be viewed as a project in itself.

The result is a series of glowing blue lines criss-crossing within the walls to create an interior that wouldn't look out of place in the futuristic Tron films.

To create the effect, the architects used lengths of white rubber wrapped around cotton threads that light up when hidden UV lights are switched on.

The installation, titled A-void, allows visitors to imagine where structural elements will be placed in the double-height space once the renovation is complete.

Floor heights and thicknesses, window and door openings are visualised around the space, planned to facilitate four staggered levels.

Four strings arranged parallel to each other diagonally mark out staircases and circulation routes, which rise up through the building to what will become a roof terrace.

"There's two volumes, one overlapping the other," said Ruberto. "The renovation proceeded with the demolition to combine the spaces, originally split over two levels."

The studio presented the installation during this year's Beijing Design Week, which continues until 3 October.

ReMIX's scheme is one of a series of "pilot projects" aiming to slowly regenerate the Dashilar area through urban interventions.

The proposal was first outlined in 2013, but "difficult and time consuming" negotiations with the neighbours meant that building work has been delayed.

The architects have finished the construction drawings and hope to have the project completed by next year's event.

For the design festival in 2013, reMIX created a string installation that guided visitors to a pop-up restaurant in the same district.